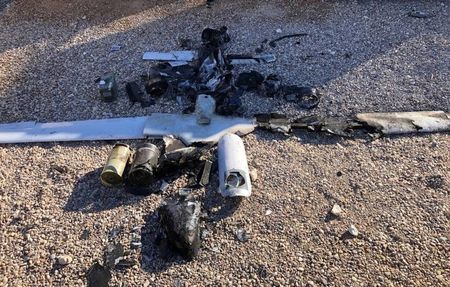 Two explosive-laden drones were shot down on Tuesday by Iraq’s air defenses as they approached the Ain al-Asad air base, which hosts U.S. forces, west of Baghdad, an official of the U.S.-led international military coalition said.

U.S. officials in recent weeks had warned that they expected an uptick in attacks against U.S. forces in Iraq and Syria, in part because of the second anniversary of the killing of top Iranian general Qassem Soleimani.

A similar attack was foiled on Monday, when Iraqi air defenses downed two drones as they approached a base hosting U.S. forces near Baghdad’s international airport.

Separately, another coalition official told Reuters that the coalition had carried out strikes against an “imminent threat” after they saw several rocket launch sites near the Green Village in Syria.

While this official did not say which country in the coalition carried out the strikes or who was responsible for the launch sites, Iranian-backed militia forces have occasionally targeted U.S. forces in both Iraq and Syria.

In Washington, the Pentagon said the coalition strikes in Syria were not carried out by aircraft, but did not provide more details on the threat.

“I’m not in a position now to get into specific attribution. That said, we continue to see threats against our forces in Iraq and Syria by militia groups that are backed by Iran,” Pentagon spokesman John Kirby told reporters.

The United States is leading the international military coalition fighting Islamic State militants in Iraq and in Syria.

Soleimani was killed on Jan. 3, 2020, in a drone strike near Baghdad airport ordered by then-U.S. president Donald Trump.

Iranian President Ebrahim Raisi said on Monday that Trump must face trial for the killing or Tehran would take revenge.