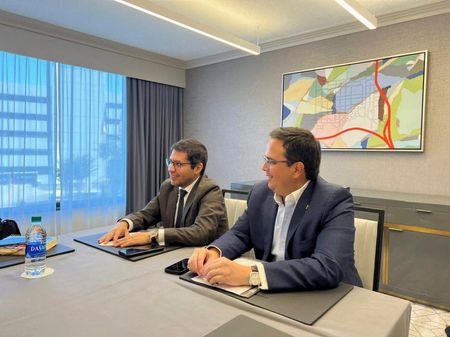 “I’m taking a step to the side with the sole purpose of being able to concentrate entirely on defending the slander leveled against me,” said Vera, who has denied wrongdoing, in a message published on the energy ministry’s Twitter profile.

The former minister thanked President Guillermo Lasso for his support and said his resignation would avoid the government being bogged down by the accusations.

Vera was the vice minister of mining for 10 months and later appointed the minister for mines and energy, which he held for six months.

Late on Thursday the attorney general’s office, which said this week it was launching a probe, searched Vera’s homes in Quito and Guayaquil and his office in the ministry of energy, as well as a hotel in the capital where someone else involved in the case had stayed.

Items like telephones and computers which were seized in the searches “will be entered into the chain of custody, amid the investigation for an alleged crime of bribery,” the office said on Twitter.

The investigation was sparked by allegations in a digital media outlet that Vera, who began his ministerial post in April, had arranged jobs at state oil company Petroecuador in exchange for payments, among other corruption accusations.

He told local media on Thursday there was no proof against him and that the accusations were a systematic effort by criminals to discredit the government.

“This is something orchestrated by the mafias which have always prowled around my sector, which drives 30% of GDP, and I’m a rock in their shoe,” Vera told Sonorama radio. “This is not a coincidence, this is a systematic effort to affect the image of the government.”