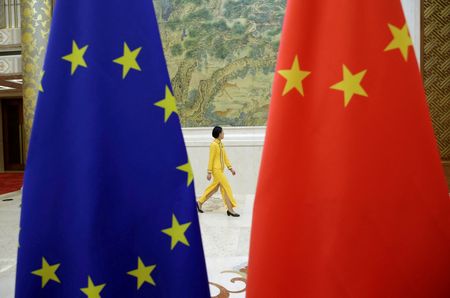 BEIJING (Reuters) – Europe has a “cognitive split” in its policy towards China by trying to both be a partner and also seeing it as an opponent, Wang Yi, state councillor and foreign minister, said in an interview with state media on Thursday.

Relations between China and the European Union worsened this year after an investment deal was frozen amid tit-for-tat sanctions and EU member Lithuania withdrew its diplomats from Beijing during a dispute over the status of Taiwan.

The European Parliament this year halted ratification of an investment pact with China until it lifted sanctions on EU politicians.

China’s sanctions were a response to Western sanctions against Chinese officials accused of the mass detentions of members of the Muslim Uyghur community in western China.

Putting up barriers to the investment agreement would “ultimately harm the long-term interests of the European people”, Wang said.

“There seems to be some kind of ‘cognitive split’ in Europe’s China policy. It is hard to imagine that, on the one hand, it has established a comprehensive strategic partnership with China and on the other hand, it has positioned China as an institutional opponent,” he said.The EU has been taking a softer stance on China, one of its most important trade partners, than the United States, but has expressed concern over its human rights record and actions in the South and East China Seas and the Taiwan Strait.

This month, EU and US officials said their approaches towards China were increasingly “convergent”.