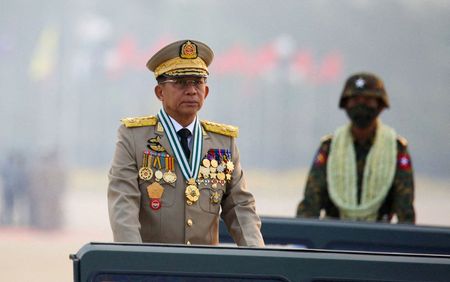 (Reuters) – The European Union is ready to impose further sanctions on Myanmar after a new escalation of violence by the army and is also urging an international arms embargo on the country, its top diplomat said on Thursday.

More than 30 people, including women and children, were killed and their bodies burnt in a village in Myanmar’s conflict-torn Kayah state last week by the army, humanitarian agencies said.

The Myanmar military said it had shot and killed an unspecified number of “terrorists with weapons” from the opposition armed forces in the village after they did not stop for a military check.

“In view of the escalating violence in Myanmar, increased international preventive action is required, including an arms embargo,” the EU’s High Representative for foreign affairs, Josep Borrell, said in a statement.

“The EU also stands ready to impose further sanctions against the military regime,” he added.

Since a military coup in February, the EU has imposed targeted sanctions on the Myanmar military, its leaders and entities. EU financial assistance to the government was halted and assistance that could be seen as legitimising the military government was frozen.

“The appalling act of violence perpetrated by the military regime in Kayah State on 24 December, killing and burning more than 35 people, including women and children, as well as humanitarian workers, underscores the urgent need to hold those responsible accountable,” Borrell said.

The Save the Children aid group said that two of its staff were killed in the attack in Kayah last week.