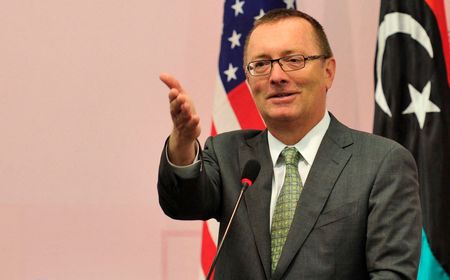 WASHINGTON (Reuters) -U.S. Special Envoy for the Horn of Africa Jeffrey Feltman will step down from his post this month after more than nine months in the job, and David Satterfield, the outgoing U.S. ambassador to Turkey, will take up the role, three sources familiar with the matter told Reuters on Wednesday.

Feltman, a veteran U.S. diplomat, assumed the post in April and quickly found himself in the middle of two major crises – Ethiopia’s deepening civil war between forces loyal to the Tigray People’s Liberation Front (TPLF) and the army of Prime Minister Abiy Ahmed, as well as a military coup in Sudan in October.

The news of his departure, which was not previously reported, came before he heads to Ethiopia on Thursday to meet with senior government officials about the peace talks as part of Washington’s latest push to bring an end to the conflict.

Feltman, 62, said https://www.reuters.com/world/sense-duty-puts-veteran-us-envoy-middle-ethiopia-conflict-2021-11-05 a “sense of duty” brought him out of “quasi-retirement” following more than 25 years as an American diplomat with postings to the United Nations, Middle East and North Africa.

Feltman took the role with an intention to serve for less than a year, a source familiar with the matter said. The source said Satterfield will provide continued U.S. focus, necessary because of ongoing instability and inter-connected challenges in the region.

Ethiopian government spokesperson Legesse Tulu declined to comment because it was an internal U.S. government matter.

Feltman has faced strong headwinds to progress. The year-long war between Ethiopia’s government and the leadership of the northern Tigray region, among Africa’s bloodiest conflicts, has killed thousands of civilians, displaced millions and sparked famine.

Getachew Reda, the spokesperson of the ruling Tigray People’s Liberation Front (TPLF), was not immediately reachable for comment.

In Sudan, protests have continued for weeks including on Tuesday, two days after the resignation of Prime Minister Abdalla Hamdok. He served from 2019 until the coup and was reinstated on Nov. 21 in an agreement with the military widely rejected by protesters.

Satterfield, a veteran of the U.S. Foreign Service with more than four decades of experience, has had a challenging post as U.S. ambassador in Turkey, where he navigated a strained bilateral relationship between the two NATO allies.

Prior to Ankara, he served in Saudi Arabia, Lebanon, Tunisia and Syria, among others, and worked twice as the top U.S. diplomat at the State Department for Middle East affairs in an acting capacity.

Turkey’s increasing drone exports, most recently to Ethiopia, will be a common thread in Satterfield’s old and new roles. Washington in December raised with Turkey its sales of armed drones to Ethiopia. Sources said there was mounting evidence the government used the weapons against rebel fighters.