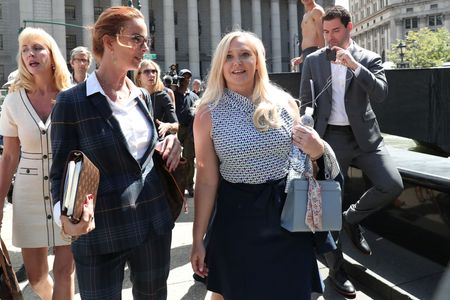 NEW YORK (Reuters) – Prince Andrew of Britain’s lawyers on Tuesday will ask a U.S. judge to dismiss a lawsuit by a woman who has accused him of forcing her to have sex two decades ago when she was 17.

Andrew has called the lawsuit by Virginia Giuffre, now 38, baseless. Giuffre also sued Andrew’s friend, the late financier Jeffrey Epstein, in 2009 accusing him of sexually assaulting her in 1998 when she was 15.

A civil settlement agreement between Epstein and Giuffre was made public https://www.reuters.com/world/us/prince-andrew-accusers-deal-with-epstein-be-made-public-part-civil-suit-2022-01-03 in federal court in Manhattan on Monday, a deal that could influence her lawsuit against the prince.

The following is a summary of the lawsuit and what it means for Andrew:

WHAT ARE GIUFFRE’S CLAIMS AGAINST ANDREW?

Giuffre, also known as Virginia Roberts, sued https://www.reuters.com/legal/government/prince-andrew-is-sued-by-jeffrey-epstein-accuser-over-alleged-sexual-abuse-2021-08-09 Andrew in New York in 2021 claiming that he sexually assaulted and battered her. Giuffre said Andrew forced her to have intercourse at the London home of Ghislaine Maxwell, a British socialite and Epstein’s longtime associate and at properties owned by Epstein.

Epstein died by suicide in a Manhattan jail cell in 2019 at the age of 66 while awaiting trial on sex abuse charges. Maxwell, 60, was convicted https://www.reuters.com/world/us/maxwell-jury-resume-deliberations-after-judge-warns-omicron-risk-2021-12-29 on Dec. 29 of sex trafficking and other crimes.

HOW HAS ANDREW RESPONDED?

Andrew’s lawyers have called the lawsuit “baseless https://www.reuters.com/world/uk/britains-prince-andrew-challenge-us-court-jurisdiction-accusers-lawsuit-2021-09-13” and accused her seeking a payday. They have argued that Giuffre signed away her right to sue the prince in her 2009 settlement with Epstein.

Andrew, 61, told https://www.reuters.com/article/us-britain-royals-andrew/prince-andrew-says-he-does-not-recall-meeting-epstein-accuser-idUSKBN1XP2CX the BBC in November 2019 that he could not have had sex with Giuffre at Maxwell’s home because he had returned to his house that night after a children’s party.

WHAT IS THE STATUS OF THE LAWSUIT?

The litigation is at an early stage. Any trial https://www.reuters.com/world/us-judge-targets-late-2022-civil-trial-prince-andrew-sex-abuse-case-2021-11-03 in the civil case would likely begin between September and December 2022 if Andrew and Giuffre do not reach a settlement before then.

WHY DOES GIUFFRE’S SETTLEMENT WITH EPSTEIN MATTER?

The settlement agreement said “any other person or entity who could have been included as a potential defendant from all, and all manner of, action and actions of Virginia Roberts” was released from liability.

David Boies, a lawyer for Giuffre, on Monday called the liability release in the 2009 settlement “irrelevant” to the case against Andrew.

COULD THE LAWSUIT HARM ANDREW LEGALLY OR HIS REPUTATION?

If the case goes to trial and Giuffre wins, Andrew could be ordered to pay Giuffre damages. She has asked for an unspecified amount.

The prince’s reputation already took a hit when Giuffre’s allegations first surfaced. Critics said https://www.reuters.com/article/us-britain-royals-andrew-duties/britains-prince-andrew-halts-public-duties-over-sex-scandal-idUSKBN1XU2CW he failed to address key questions during his November 2019 interview with the BBC, and Andrew stepped down from public duties days after the interview aired.

COULD THE LAWSUIT LEAD TO CRIMINAL JEOPARDY FOR ANDREW?

No. Andrew has not been charged criminally, and no criminal charges could result from Giuffre’s lawsuit since it is a civil case.

Andrew repeatedly declined requests by federal prosecutors in the United States for an interview about their probe into Epstein’s sex trafficking, former U.S. Attorney for the Southern District of New York Geoffrey Berman said in June 2020.

A spokesman for the U.S. Attorney’s office declined to comment on Monday. It was not clear if prosecutors still want to talk to Andrew.

No. Giuffre did not testify in Maxwell’s criminal trial, and her allegations did not form the basis of any of the six sex abuse counts against her.

DOES ANDREW’S ROYAL STATUS HAVE ANY IMPACT ON THE CASE?

Diplomats are often entitled to a certain degree of legal immunity in the countries in which they are posted. Heads of state – such as Andrew’s mother, Queen Elizabeth II – are entitled to a degree of immunity as well.

Andrew does not appear to fit either category, said Craig Barker, a law professor at London South Bank University.

“There’s nothing I can see in the law that would suggest that he would have any entitlement to immunity whatsoever, whether that be in civil or indeed in criminal matters,” Barker said.