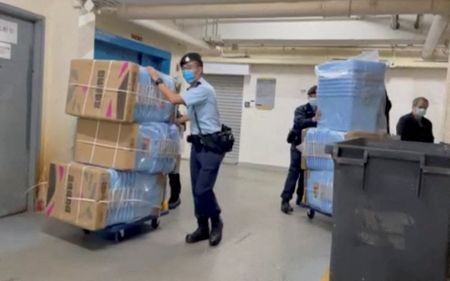 The raid further raises concerns about the freedom of speech and that of the media in the former British colony, which returned to Chinese rule in 1997 with the promise that a wide range of individual rights would be protected.

Below are key facts about Stand News:

* Set up in 2014 as a non-profit, Stand News is the most prominent remaining pro-democracy publication in Hong Kong after a national security probe earlier this year led to the closure of jailed tycoon Jimmy Lai’s popular Apple Daily tabloid.

* It publishers a wide range of political, social and cultural stories on its website. Earlier this year it produced an investigative piece into the July 2019 attacks by suspected triad gangsters on pro-democracy activists at a railway station in suburban Yuen Long – an event which exacerbated months of sometimes violent anti-government protests across the city.

Its former reporter Gwyneth Ho was assaulted on the night as she live-streamed the attacks on to Stand’s website. Ho later announced her intention to run in a legislative election for the pro-democracy camp and was arrested earlier this year together with 46 other activists for “conspiracy to commit subversion.”

* Stand News was the only Hong Kong media outlet to work with the International Consortium of Investigative Journalists to produce reports on the Pandora Papers in Oct. 2021 – a trove of 12 million leaked documents revealing the hidden wealth and tax structures of some of world’s richest and most powerful people.

* Stand News takes funding from commercial advertising, donors and public subscribers but no information is available on its financial position or subscriber figures. It has 1,720,481 followers and 1,276,407 likes on Facebook.

It said in June it would stop accepting donations from readers and had taken down commentaries from the platform to protect supporters, authors and editorial staff, adding that “speech crimes” had come to Hong Kong.

* Its deputy assignment editor Ronson Chan is also the head of the Hong Kong Journalists Association.