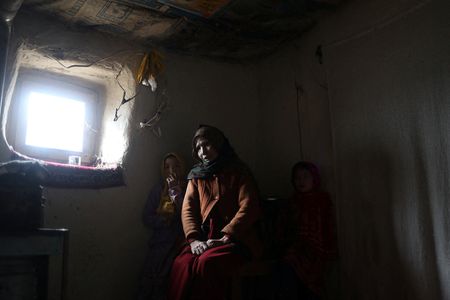 BAMIYAN, Afghanistan (Reuters) – As winter sets in, Afghan widow Kubra needs to find fuel to heat the single room where eight family members live in the central province of Bamiyan. The flour they bought months ago is running out, so food is also becoming scarce.

“We got two sacks of flour last spring which we’re still using. After that, we have to have faith that God will help us,” the 57-year-old told Reuters in a room lined with rice sacks to keep out the cold.

Their firewood was stolen when they left their home amid the chaos that engulfed Afghanistan in the summer, as Taliban insurgents swept towards Kabul on their way to seizing back control of the country.

Stories like Kubra’s are increasingly common in a country struck by severe drought and where money has run dry.

Before the Taliban toppled the Western-backed government in August, the economy relied heavily on foreign aid. But with the international community wary of the Islamist militant movement and the United States imposing sanctions on some of its leaders, that support has all but disappeared.

The United Nations estimates nearly 23 million Afghans – about 55% of the population – are facing extreme levels of hunger, with nearly 9 million at risk of famine as winter takes hold.

Life for Afghanistan’s poor has always been hard; Kubra’s family works on farms in the spring, earning potatoes instead of money.

But it’s getting worse. Vegetables like cauliflower are out of reach, and plastic sheets protect their home from the freezing weather and snow. There is so little space in the single room that Kubra sleeps at her sister’s house at night.

“My son used to collect pieces of scrap metal but right now he has no work,” she said.

Already vulnerable after months of severe drought and decades of war that forced many to flee homes for relatively stable regions like Bamiyan, Afghans are entering the unknown.

“We never used to have different kinds of food but in the past it was alright, we had rice and cooking oil,” said Massouma, a 26-year-old mother of four from the neighbouring province of Maidan Wardak.

“We used to cook once a day and that was good. Now it’s once a week and sometimes there isn’t even any bread to eat.”

Bamiyan is best known outside Afghanistan for imposing Buddhist sites which dominate the little market town, 20 years after the Taliban blew up the two giant statues that once looked down over the high plains.

In winter it is bitterly cold, with temperatures that can drop below freezing and biting winds.

Work slows in the cold months, but the region was already suffering since the visitors who once came for the Buddhist sites and the nearby Band-e Amir lake disappeared as the Taliban offensive reached its climax.

Taliban officials say they are aware of the problems facing the poor, which they say stem partly from the effects of more than four decades of conflict and mismanagement under the previous government.

They have also repeatedly called on Washington to unblock around $9 billion in central bank assets.

“We intend to ease these problems,” said Taliban spokesman Zabihullah Mujahid. “We know what the people are facing.”

The crisis Afghanistan faces this winter is of a magnitude not seen for at least 20 years, when the Taliban were ousted by U.S.-backed forces and replaced by governments in Kabul who relied heavily on foreign support – both financial and military.

With the former insurgents back in power the financial system is all but closed, prompting a collapse in the local afghani currency.

The international community is looking to restore aid by pressing the Taliban to become more inclusive and ensure basic human rights including lifting restrictions keeping women and girls from work and school.

Like other Taliban officials, Mujahid said the new government was slowly opening schools for girls and had promised an amnesty for former government officials.

He also pointed to the recent appointment of Abdul Latif Nazari, a sometime Kabul university lecturer from the Hazara minority, as deputy economy minister as evidence the government was becoming more inclusive.

While the wrangling continues, people like Sayed Yassin Mosawi have more immediate concerns.

“In the winter, we normally borrow what we need from shops or the baker and we repay the loan after two or three months when the work starts getting better,” said the market porter, whose income drops to between 30-50 afghani ($0.30-0.50) a day during the quiet winter months.

“But there have been big changes,” he said. “Since the Taliban took over, there is no work, prices have gone up, people have left the country. We have nothing left.”