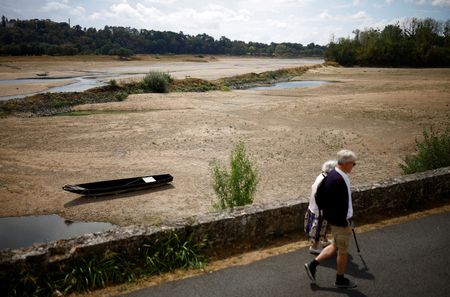 LOIREAUXENCE, France (Reuters) – France’s river Loire, famous for the hundreds of castles gracing its shores, is a shallow river at the best of times, but this year even its flat-bottom tourist barges can barely navigate waters greatly reduced by a record drought.

Even some 100 kilometers from where the Loire empties into the Atlantic Ocean, sand banks now stretch as far as the eye can see, large islands connect to the shore and in places people can practically walk from one side of the river to the other.

The Loire valley – a UNESCO World Heritage site famed for majestic chateaux such as Chambord, Chenonceau and Azay-le-Rideau – has suffered historically low water levels before, but this year’s drought should be a wake-up call, said Eric Sauquet.

“The Loire’s tributaries are completely dried up. It is unprecedented,” said Sauquet, who is head of hydrology at France’s National Institute for Agriculture, Food, and Environment (INRAE).

“We have to worry about the Loire,” he added.

For river fish, the low water levels are disastrous. The shallow water loses oxygen as it heats up and makes them easy prey for herons and other predators.

“Fish need water to live, cool water. When water levels get this low, their environment shrinks and they get trapped in puddles,” Sauquet said.

River flow is at about 40 cubic metres per second – less than a twentieth of average annual levels. It would be even lower if authorities did not release water from dams at Naussac and Villerest, built in the 1980s partly to guarantee cooling water supply to four nuclear plants built along the river.

The four plants – at Belleville, Chinon, Dampierre and Saint-Laurent – have a combined capacity of 11.6 gigawatts, accounting for nearly a fifth of French electricity production.

With several EDF plants already out of action for technical reasons and others operating at reduced capacity because of low river waters, closing one or more of the Loire plants could push power prices higher Europe-wide.

“Even in 1976, the water was never as low as this,” said longtime riverside resident Brigitte Gabory Defois.

Yet, days after major wildfires hit France, torrential rain flooded parts of the Paris metro and storms lashed southern France, while in some villages in the south, water was brought by trucks as natural springs have run dry.

“Climate change is underway, it’s undeniable… All users will have to re-think their behaviour with respect to water resources,” Sauquet said.