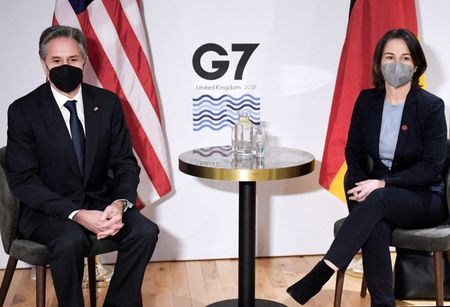 BERLIN (Reuters) – German Foreign Minister Annalena Baerbock, who is travelling to Washington to meet U.S. Secretary of State Antony Blinken on Wednesday, said she would reaffirm the importance of dialogue with Russia to prevent conflict over Ukraine.

“With regard to Russia, the common message from Europeans and the U.S. government is clear: Russian actions come with a clear price tag, and the only way out of the crisis is through dialogue,” Baerbock said in a statement.

“We are entering a decisive phase in which important talks at different levels are imminent. And even if the formats of the talks vary, our messages as transatlantic partners to the government in Moscow are always the same.”

Alarmed by Russia’s military build-up along Ukraine’s border, U.S. and Russian officials are due to hold security talks on Jan. 10 in Geneva and NATO has scheduled a meeting of allied ambassadors and top Russian officials for Jan. 12.