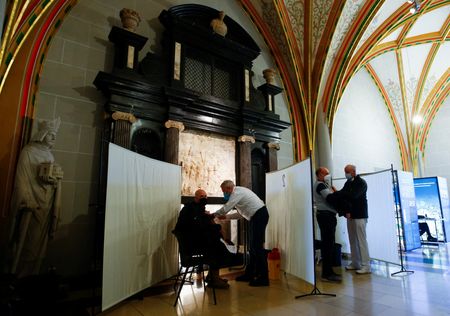 BERLIN (Reuters) – Germans want their new government to focus on fighting the coronavirus pandemic and safeguarding pensions in 2022, with fewer people wanting them to prioritise the climate crisis, an opinion poll showed on Sunday.

The survey by pollsters Insa for the Bild am Sonntag newspaper showed that 61% of the 2,004 people questioned think combating the pandemic is the most important task of the government, followed by securing pensions.

Germans also want the government to deal with a shortage of staff in nursing homes, provide affordable housing and limit the rise in energy prices. Dealing with the impact of climate change only ranks sixth in their list of priorities.

“Direct, concrete concern about one’s own livelihood comes ahead of the often more abstract concern about the consequences of climate change,” said Insa head Hermann Binkert.

Chancellor Olaf Scholz said in his first New Year’s address that Germany wants to use its presidency of the Group of Seven (G7) to develop it into a club that is pioneering in its efforts to achieve green growth and a socially just world.