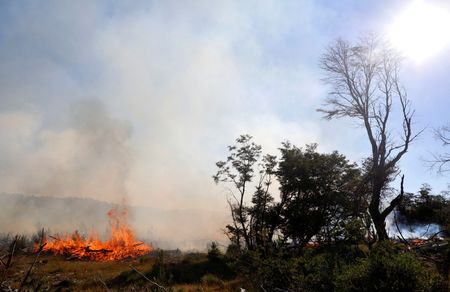 BUENOS AIRES (Reuters) – A helicopter that was fighting forest fires in the rugged Patagonia region of southern Argentina crashed on Wednesday, killing two crew members, according to local press reports.

The aircraft, which had been contracted by the government to fight the fires, fell in the area of ​​Quillen, a lake located in the province of Neuquen.

More than 200 fire brigades and a dozen aircraft were fighting fires in the Nahuel Huapi National Park and other parts of Patagonia, an area known for its forests, lakes and mountains, according to local newspaper La Nacion.

The Federal Council for the Environment (Cofema) and the Ministry of Environment declared a fire emergency in the area.

“We are facing a scenario that may tend to recur over time, that is to say, a period of prolonged droughts and of running dry seasons throughout the year,” the emergency declaration said, adding the situation was “most likely a result of climate change”.