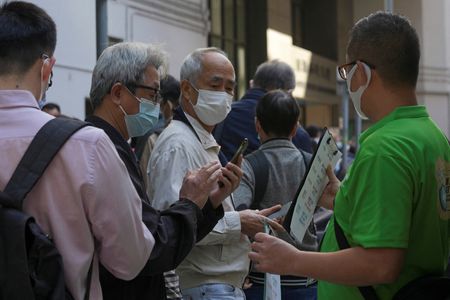 By Marius Zaharia and Donny Kwok

HONG KONG (Reuters) – Hong Kong’s health officials said on Friday the Omicron variant of the coronavirus has made its way past some of the world’s toughest COVID 19 restrictions, with the city reporting its first cases outside its strict quarantine system.

The findings raise risks that the global financial hub might keep its borders shut well into 2022. It has largely isolated itself from the world hoping in turn to open the border with mainland China for a limited number of business travellers.

Hong Kong’s last COVID-19 case tracked outside its quarantine facilities and hotels was discovered in October. Previous infections with the Omicron variant were discovered during quarantines of people returning to Hong Kong.

Health Secretary Sophia Chan told reporters one of four air crew members who tested positive after their return to Hong Kong had breached home quarantine rules by going to a restaurant, where he passed the virus to his father and a client sitting at another table.

“Omicron is raging around the world … and it has now found its way into the community,” Chan said.

She added that China border reopening preparations continued, but “the priority was handling the pandemic.”

Health official Chuang Shuk-kwan told reporters a different airline worker, who tested positive but was previously thought to have stayed at home, had visited a bar in a crowded nightlife district shortly after their latest flight back.

Chan said Chief Executive Carrie Lam met with Cathay Pacific Airways officials earlier on Friday to express her dissatisfaction with the breaching of the rules.

Cathay said in a statement five of its aircrew had tested positive in recent days and its “investigation into the cases has indicated a serious breach of protocols by some of those individuals,” adding it will initiate disciplinary procedures.

“The actions of these individuals are extremely disappointing, as they undermine the otherwise exemplary dedication and compliance shown by our over 10,000 aircrew,” said Andy Wong, general manager of Corporate Affairs.

The government this week tightened quarantine rules for air crew, who had been allowed to quarantine at home, unlike most people returning to the city who have to quarantine in hotels for up to 21 days at their own cost.

Pilots had expressed worries about their mental health amid prolonged periods of isolation even before the tightening.

Cathay said on Thursday the latest tightening had forced it to cancel a significant number of passenger and cargo flights to and from Hong Kong.

Hong Kong has been coronavirus-free for extended periods since the pandemic began.

But less than 70% of its eligible population, far lower than in other developed cities, have taken two shots of either China’s Sinovac or Germany’s BioNTech vaccines.

Only about 5% of people have received a third booster shot.

Even three doses of Sinovac’s vaccine do not produce adequate levels of antibodies to fight the Omicron variant, researchers from Hong Kong found.