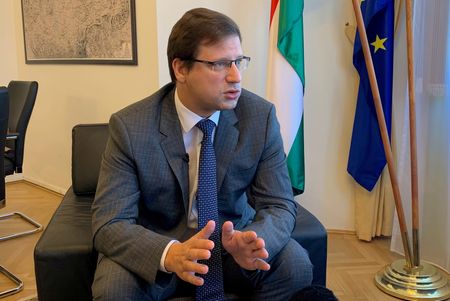 By Krisztina Than and Gabriela Baczynska

The executive European Commission has been withholding its approval to pay out money meant to help lift economies from the COVID-19 malaise to Poland and Hungary, accusing them of undermining the rule of law.

The Commission also sent a formal letter to Hungary on Wednesday in a first step of its fresh offensive against what it says is Orban dismantling democratic checks and balances. The process could freeze funds for Hungary over corruption risks.

Orban’s chief of staff Gergely Gulyas told a briefing the government studied the letter, and he was optimistic about an agreement on the release of recovery funds.

“The issues raised in the letter are all issues that we have been negotiating about for months with the Commission,” Gulyas said. “There is no point where we don’t have a shared position, or where we wouldn’t have found an acceptable solution.”

“In our discussions with Hungary, we have made progress on a number of issues over the months. However, there are a number of points that remain open, including on anti-corruption and education measures,” said Commission spokeswoman Veerle Nuyts.

She said unlocking the 7.2 billion euros ($7.54 billion)envisaged for Hungary under the COVID recovery programme was separate from the case it had launched the day before and where Brussels refused to specify how much money Hungary could lose.

At the centre of both disputes is Hungary’s public procurement system, which the EU says does not ensure enough competition or protect from conflict of interests and corruption.

Rights advocates say Orban – who won a fourth consecutive national election earlier this month – has long channeled EU funds to his associates to solidify his grip on power.

Gulyas said Hungary agreed with an EU proposal to reduce the share of public procurement tenders with a single bidder. He said Budapest was ready to cut such contracts below 15%.

“There are also expectations with regard to abuses with EU funds and we have found a solution here as well, which could be sufficient for the Commission,” he added.

“Serious concern” about the functioning of Hungarian authorities managing EU funds and controlling how Orban’s government spends the money was aggravated by limitations on effective investigation and independent prosecution, they said.

Hungary had irregularities in nearly 4% of its spending of EU funds in 2015-2019, according to the bloc’s anti-fraud office OLAF, compared to an EU average of 0.36%.

(Reporting by Krisztina Than, Anita Komuves and Gabriela Baczynska; Editing by Catherine Evans and Tomasz Janowski)