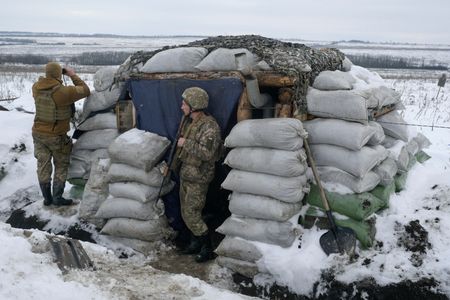 KRYMSKE, Ukraine (Reuters) – A soldier peers over the top of a wooden trench as snow falls thickly on the surrounding fields near the village of Krymske in eastern Ukraine.

Inside the trench, another soldier stands in front of a small Christmas tree, with messages and drawings from well-wishers pinned on the wall behind him.

This is the frontline of Ukraine’s eight-year war against Russian-backed forces in the Donbass region https://www.reuters.com/world/europe/how-rebel-held-regions-eastern-ukraine-have-grown-closer-russia-2021-12-15.

Russian troop movements near Ukraine’s borders https://www.reuters.com/world/europe/why-is-russias-putin-so-focused-ukraine-2021-12-15 have alarmed Kyiv and its Western allies in recent weeks. The soldiers say they are ready for any escalation from Russia.

“We are determined to stand firm, we will not give up our country. We fought for independence for a long time,” said one serviceman, who gave his nom-de-guerre as Martin.

“At home, my parents and wife are worrying,” he said.

“I don’t plan to stay here forever. I plan to repel (a Russian attack) and come back home so that my daughter will later say: ‘Wow, father, you managed to stop superpower with your own hands.’

U.S. officials have said Russia might launch a new attack against Ukraine as early as the second half of January.

Russia denies it is planning an offensive and accuses Kyiv of building up its own forces in the east of the country. But Moscow has demanded security guarantees it wants from the West in order to defuse the current crisis.

Another serviceman, who gave his name as Oleh, played down the prospect of a major escalation.

“If they show off their muscles and rattle their sabres, then it is unlikely they will attack. If someone wants to attack, he does it covertly,” he said.