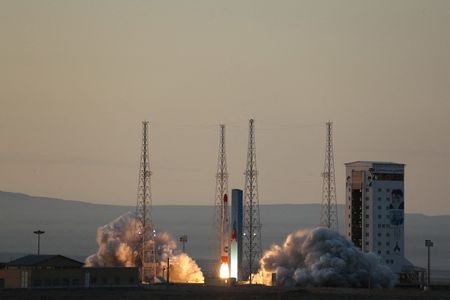 He did not clarify whether the devices had reached orbit, but suggested the launch was a test ahead of coming attempts to put satellites into orbit.

Iran, which has one of the biggest missile programmes in the Middle East, has suffered several failed satellite launches in the past few years due to technical issues.

Spokesman Ahmad Hosseini said the Simorgh (Phoenix) satellite carrier rocket had launched the three research devices at an altitude of 470 km (290 miles) and at a speed of 7,350 metres per second.

“The intended research objectives of this launch were achieved,” Hosseini told state television. “This was done as a preliminary launch … God willing, we will have an operational launch soon.”

State TV showed footage of what it said was the firing of the launch vehicle from the Imam Khomeini Space Center in northern Iran at dawn.

“By developing our capacity to launch satellites, in the near future satellites with a wide range of applications… will be placed into orbit,” Hosseini said.

“The payloads launched today were subsystems of satellites that were tested in vacuum conditions and high altitude as well as high acceleration and speed and the data was gathered,” he added.

Information and Communications Technology Minister Isa Zarepour said: “I hope lessons learned from this research launch will pave the way for operational access to satellite system launch technology”, according to state media.

Thursday’s reported launch comes as Tehran and Washington hold indirect talks in Vienna in an attempt to salvage a nuclear accord that Iran reached with world powers and that former U.S. president Donald Trump abandoned in 2018.

A U.S. State Department spokesperson said Washington was aware of reports on the launch, adding that such launches defy a U.N. Security Council resolution enshrining the 2015 nuclear deal.

The United States imposed sanctions on Iran’s civilian space agency and two research organisations in 2019, claiming they were being used to advance Tehran’s ballistic missile programme.

Tehran denies such activity is a cover for ballistic missile development.

Iran launched its first satellite Omid (Hope) in 2009 and its Rasad (Observation) satellite was sent into orbit in 2011. Tehran said in 2012 that it had successfully put its third domestically-made satellite, Navid (Promise), into orbit.