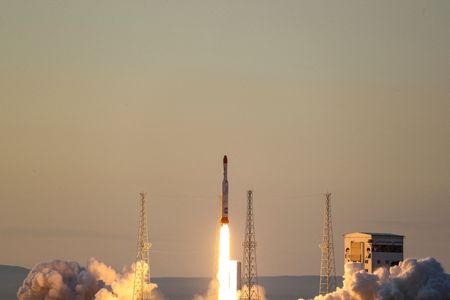 DUBAI (Reuters) -Iran’s space launch on Thursday failed to put its three payloads into orbit after the rocket was unable to reach the required speed, a defence ministry spokesman said in remarks carried on state television on Friday.

The attempted launch, which came as indirect U.S.-Iran talks take place in Austria to try to salvage a 2015 nuclear deal, drew criticism from the United States, Germany and France.

“For a payload to enter orbit, it needs to reach speeds above 7,600 (metres per second). We reached 7,350,” the spokesman, Ahmad Hosseini, said in a documentary about the launch vehicle broadcast on state TV and posted online.

On Thursday, Hosseini did not clarify whether the devices had reached orbit, but suggested the launch was a test ahead of coming attempts to put satellites into orbit.

Iran, which has one of the biggest missile programmes in the Middle East, has suffered several failed satellite launches in the past few years due to technical issues.

Washington has said it is concerned by Iran’s development of space launch vehicles, and a German diplomat said Berlin had called on Iran to stop sending satellite launch rockets into space, adding that they violated a U.N. Security Council resolution. [bL1N2TF0B4]

France said on Friday the rocket launch aimed at sending three research devices into space violated U.N. rules and was “even more regrettable” as nuclear talks with world powers were making progress.

“Scientific and research advances, including in the field of aerospace, are the inalienable right of the Iranian people, and such meddling statements will not undermine the Iranian people’s determination to make progress in this field,” it said in a statement carried by state media.

Tehran denies that its space activity is a cover for ballistic missile development or that it violated a U.N. resolution.

A U.N. resolution in 2015 “called upon” Iran to refrain for up to eight years from work on ballistic missiles designed to deliver nuclear weapons following an agreement with six world powers. Some states said the language did not make such a pledge obligatory.

Iran says it has never pursued the development of nuclear weapons and, therefore, the resolution does not apply to its ballistic missiles, which Tehran regards as an important deterrent and retaliatory force against U.S. and other adversaries in the event of war.

Iran launched its first satellite Omid (Hope) in 2009, and its Rasad (Observation) satellite was sent into orbit in 2011. Tehran said in 2012 that it had successfully put its third domestically made satellite, Navid (Promise), into orbit.

The United States imposed sanctions on Iran’s civilian space agency and two research organisations in 2019, saying they were being used to advance Tehran’s ballistic missile programme.