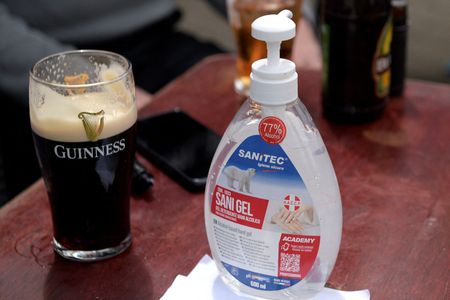 DUBLIN (Reuters) – Ireland on Thursday became the latest country to cut the isolation period for some people who contract COVID-19 and relax requirements for tests as a record number of cases for the fourth time in a week overwhelmed testing facilities.

With the fast-spreading Omicron variant of the coronavirus accounting for 92% of all infections, the health department reported 20,554 new cases, more than double the record in any previous wave to bring the 14-day infection rate to 2,300 per 100,000 people.

With long isolation times and close contact rules causing staff disruptions to public transport, retail and hospitality, the government cut the isolation period to seven days from 10 for people who have tested positive but have received a booster vaccine or been infected within the previous three months.

Ministers also asked health chiefs to keep under review the current guidance that close contacts of confirmed cases must restrict their movements, even if they are not symptomatic, Health Minister Stephen Donnelly said in a statement.

Donnelly also said that those aged 4-39 years should only seek a PCR test if they have a positive at-home rapid antigen test after online appointments for the free tests run by the health service were snapped up in minutes each day this week.

If the rapid tests are repeatedly negative, any symptomatic people in that age bracket should continue to self-isolate until 48 hours after their symptoms have resolved.

Public health officials in Ireland long resisted relying on antigen tests to control the spread of COVID-19 and government dropped a plan to subsidise the rapid tests last month after ministers said retailers had cut their prices sufficiently.

Chief Medical Officer Tony Holohan also urged people to keep their social contacts as low as possible ahead of the usual New Year’s Eve celebrations. Bars and restaurants in Ireland must shut at 8 p.m. under restrictions introduced earlier this month.