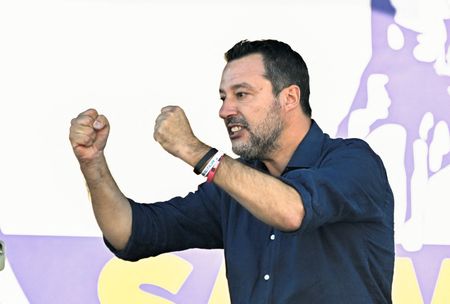 PONTIDA, Italy (Reuters) – The rightist League aims to win the Italian premiership when the country holds an election next week, its leader Matteo Salvini told his party’s annual rally in northern Italy on Sunday.

A conservative alliance of parties, including the League, is widely expected to win the Sept. 25 election. But it is likely to be a bittersweet moment for Salvini who has seen his position as undisputed leader of the right usurped by Giorgia Meloni.

“For me, it would be a pride, a joy, a thrill to be chosen by you and President Sergio Mattarella as prime minister of this extraordinary country,” Salvini said before thousands of flag-waving supporters in Pontida, the spiritual home of his party.

Meloni’s nationalist Brothers of Italy party is forecast to take around 25% of the vote, while the League is seen at around 12%, down from 34% in a European parliament election in 2019.

Some League veterans have suggested that Salvini could be ousted if the vote share falls further, but diehard supporters rejected any talk of failure on Sunday.

“They might receive less votes but I am confident the centre-right will win… and given it is a coalition they will rule all together,” said supporter Marco Mollica, a 39-year-old metalworker from Turin.

The League returned to Pontida – where it held its first annual rally in 1990 – after a three-year hiatus caused by the COVID-19 pandemic.

Party officials said a fleet of more than 200 buses and trains brought an estimated 100,000 supporters from across the country this year.

However, the crowd seemed smaller than in 2019, when 35,000 to 40,000 people were estimated to have attended, and two policemen told Reuters that there were around 15,000 participants.

The Northern League was originally rooted in the wealthy north, with the then leader Umberto Bossi demanding secession from the poorer south. Salvini controversially stripped the word “northern” from the party name and pushed to create a national force – a decision that upset many of the old faithful.

Salvini promised that if the League formed part of the next government it would push for autonomy for regions, giving them more say over how locally raised taxes are spent – something the nationalist Meloni has appeared lukewarm about.

“Autonomy rewards those who govern well and helps citizens because it takes the mask off the chatterers who leave their people in emergency for years and say it is always the fault of others,” he said.

Salvini, 49, rebuilt the party from near ruin when he took charge nine years ago, replacing the old independence battle cries with the slogan “Italians first” and replacing chants against Rome with insults directed at Brussels.

His strategy appeared to work, with the League forming a coalition government in 2018 and Salvini himself becoming interior minister. But a series of political blunders since then have allowed his ally Meloni to leapfrog him in the polls.

At the beginning of the rally, ministers and regional governors of the League formally committed to giving greater autonomy to regions and pursuing cuts in taxes and energy bills. They also promised to lower the retirement age, stop immigrant landings and to improve the justice system.

In his speech, Salvini vowed to scrap the 90-euro tax Italians pay annually to fund the state-owned broadcaster RAI and to revitalise small villages by making them a real estate tax-free zone.

“Giorgia, Silvio and I have the same view on everything, almost everything, and for five years we will be ruling well together,” he said.