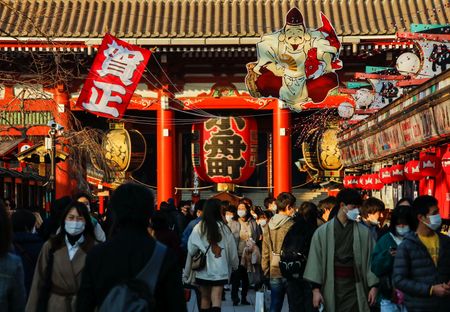 TOKYO (Reuters) – Japan braced for a feared rebound in coronavirus cases as the highways and airports filled with travelers at the start of New Year’s holidays on Wednesday.

The governors of the metropolises of Tokyo and Osaka urged residents to keep end-of-year gatherings small, as more cases of the Omicron variant of COVID-19 come to light, including a suspected cluster at an Osaka nursing home.

Health officials advised travelers to avail themselves of free coronavirus tests before departure, amid fears that an outpouring of city dwellers could spread infections to the countryside.

“The highest risk is meeting people without taking adequate measures to prevent infection,” said Norio Ohmagari, director of the Disease Control and Prevention Center and a top health advisor to the Tokyo Metropolitan Government.

“Also, due to the reports of relatively mild infections caused by the Omicron strain, people are underestimating the risk of corona.”

Officials in Osaka confirmed five Omicron cases at a nursing home, believed to be the first cluster of the variant in Japan, Kyodo news agency reported on Tuesday.

Community transmission of Omicron has been found in eight prefectures so far, according to a Jiji news agency tally. The variant may comprise 90% of COVID-19 cases in Osaka by early next month, according to a projection released on Tuesday by Kyoto University professor Hiroshi Nishiura.

Concerns that Omicron may be more infectious and evade vaccine protections have prompted Prime Minister Fumio Kishida to accelerate Japan’s booster shot programme and maintain some of the world’s strictest border restrictions.

New COVID-19 infections have ticked up in recent weeks, reaching 385 nationwide on Tuesday. Even so, serious cases and deaths have stayed low, aided by a vaccination push that has fully inoculated almost 80% of the population.

Japan has seen just 28 COVID-19 related fatalities in December, on course for the lowest monthly tally since July 2020.