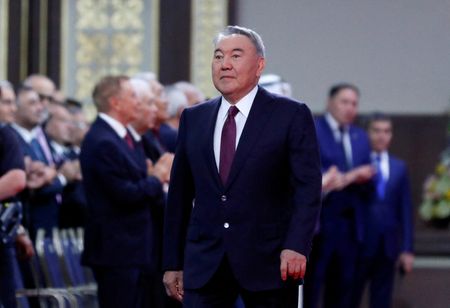 ALMATY (Reuters) – Kazakhstan’s President Kassym-Jomart Tokayev said on Wednesday he had taken over as head of the powerful Security Council from veteran former leader Nursultan Nazarbayev and promised to respond with “maximum toughness” to fuel price protests.

In a televised address, Tokayev said he was immediately assuming the leadership of the Security Council, a role in which Nazarbayev had continued to wield significant influence after unexpectedly stepping down from the presidency in 2019.

He did not mention Nazarbayev by name. The former president, 81, has not been seen or heard from in public since the start of the protests that led Tokayev earlier on Wednesday to accept the resignation of his government.

The move appeared to mark the definitive sidelining of Nazarbayev, a former Communist Party boss who ruled unchallenged as president for nearly three decades after Kazakhstan gained independence with the collapse of the Soviet Union in 1991.

It was unclear if this would satisfy the protesters, some of whom were heard chanting “Old man, go away!”, a traditional anti-Nazarbayev slogan.

Earlier, Tokayev had removed Nazarbayev’s nephew from his post of no. 2 at the State Security Committee, the successor to the Soviet-era KGB.