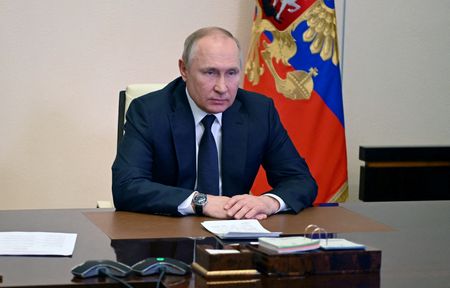 LONDON (Reuters) -The Kremlin said on Saturday that the West was behaving like a bandit by cutting economic relations over the conflict in Ukraine but that Russia was far too big to be isolated as the world was much larger than just the United States and Europe.

Kremlin spokesman Dmitry Peskov told reporters that the West was engaged in “economic banditry” against Russia and that Moscow would respond. He did not specify what response there would be but said it would be in line with Russian interests.

“As you understand, there must be a corresponding response to economic banditry,” Peskov said.

“This does not mean Russia is isolated,” Peskov told reporters. “The world is too big for Europe and America to isolate a country, and even more so a country as big as Russia. There are many more countries in the world.”

Russia’s invasion of Ukraine, which it calls a “special military operation” aimed at disarming its neighbour, has triggered a barrage of sanctions and led to an exodus of big companies from the Russian market.

Peskov noted that channels for dialogue between Moscow and Washington still existed.

He said that if the United States imposed sanctions on Russia’s oil and gas exports then it would give a considerable jolt to world energy markets.

Asked about a law which President Vladimir Putin signed that stiffens punishments for discrediting the Russian armed forces, Peskov said such laws had to be obeyed.

The law was introduced urgently in an extraordinary situation, he said, because Russia was facing an unprecedented information war unleashed by the West.

Foreign companies, he said, would one day return to Russia, although some would find others had taken their places.

“A time of surging economic growth will replace this time. And a time when these same companies will again return to the market, and will be more than interested in catching up on what they’ve missed out on and restoring their positions.