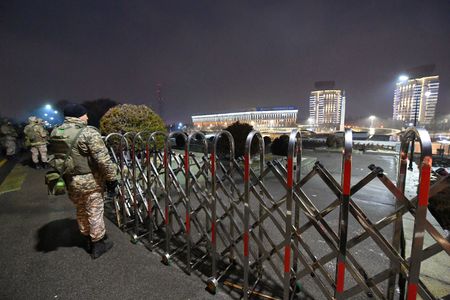 MOSCOW (Reuters) – Kremlin spokesman Dmitry Peskov said on Wednesday that Kazakhstan could solve its own problems and it was important that no one interfered from the outside, RIA news agency reported.

It quoted Peskov as saying Kazakhstan had not requested Russian help to deal with protests, triggered by a fuel price increase, that prompted the resignation of its government on Wednesday.

Russia is acutely sensitive to unrest in former Soviet republics it regards as part of its sphere of influence, and in the past has accused the West of stoking revolutions in countries such as Georgia and Ukraine.

Russia’s foreign ministry said it was closely monitoring the situation in its southern neighbour and counting on the “soonest possible normalisation”.

“We advocate the peaceful resolution of all problems within the constitutional and legal framework and dialogue, rather than through street riots and the violation of laws,” it said.

It said this was precisely the aim of the steps taken by Kazakh President Kassym-Jomart Tokayev “to stabilize the situation and resolve existing problems quickly, including those contained in the legitimate demands of the protesters.”

This appeared to refer to Tokayev’s decision to reverse the New Year fuel price increase that first triggered protests in the west of the country.

The Russian statement used more cautious language than Tokayev, who has blamed the violence on domestic and foreign provocateurs.