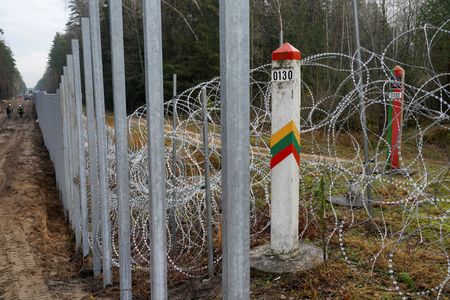 VILNIUS (Reuters) – The Lithuanian government on Wednesday decided against extending a state of emergency along the country’s border with Belarus and at camps hosting migrants who had arrived from the country, Prime Minister Ingrida Simonyte said.

EU member states accuse Belarus of encouraging illegal migrants from the Middle East, Afghanistan and Africa to cross the border into the EU in retaliation for sanctions imposed on Minsk over human rights abuses.

“At this time the government will not propose to continue with the state of emergency beyond Jan. 15, but we might need to consider it depending on how the situation develops”, said Simonyte.

The state of emergency law, in place since Nov. 9 when hundreds of migrants set up camps along Belarus’ border with Poland, allows border guards to use “mental coercion” and “proportional physical violence” to prevent migrants from entering Lithuania.

Hundreds of migrants were turned away at the Belarus border last year on some days, but no migrants attempted to enter this week, according to official numbers.

(Reporting by Andrius Sytas in Vilnius; Editing by Alexandra Hudson)