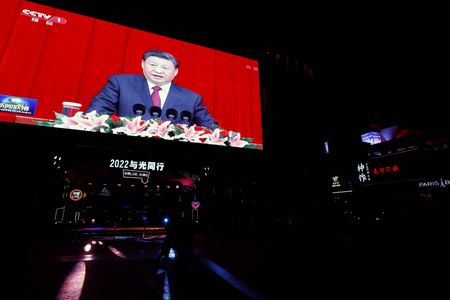 BEIJING (Reuters) – Chinese President Xi Jinping stressed the importance of maintaining a “strategic focus” in his 2022 New Year address and of being mindful of “potential risks” in the Communist Party’s long-term vision to turn China into a global power.

Xi in 2021 declared that China had achieved its aim of building a so-called “moderately prosperous” society, a milestone on its road to becoming a global leader in 2049, the 100th anniversary of the founding of the People’s Republic of China.

“We must always keep a long-term perspective, remain mindful of potential risks, maintain strategic focus and determination, and ‘attain the broad and great while addressing the delicate and minute’,” Xi said in a televised speech.

China, where the coronavirus was first identified in late 2019, has placed a focus on its achievements past and present, including quickly bringing COVID-19 under control as its economy lost steam after rebounding from a pandemic slump and as relations with the United States plumbed new lows.

Xi said the complete unification of “the motherland” was an aspiration shared by people on both sides of the Taiwan Strait, referring to the self-ruled island of Taiwan which it considers “sacred” territory.

“I sincerely hope that all the sons and daughters of the Chinese nation will join forces to create a brighter future for our nation,” he said.

Xi also stressed the importance of stability in the former British colony of Hong Kong and the former Portuguese-run enclave of Macau, which returned to China in 1997 and 1999 respectively.

Under the handover deal, Hong Kong was promised that its wide-ranging individual freedoms, including freedom of speech, would be protected.

But activists complain that those freedoms have been eroded since China passed a new national security law in 2020 crushing dissent in the wake of at times violent pro-democracy, anti-China street protests a year earlier.

Chinese and Hong Kong officials have defended the law as necessary to restore order.

Unlike in previous years, Xi did not talk about China’s gross domestic product in his address.