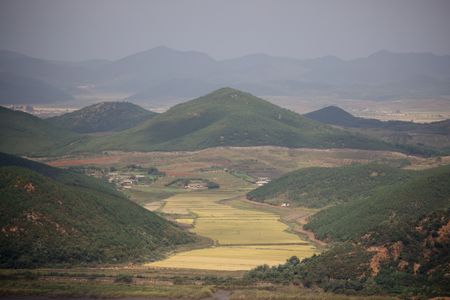 SEOUL (Reuters) -A man observed crossing the heavily fortified border from South Korea into North Korea last week is believed to be a North Korean who previously defected to the South in 2020 in the same area, Seoul’s defence ministry said on Monday.

South Korea’s Joint Chiefs of Staff (JCS) had said it carried out a search operation after detecting the person on Saturday https://www.reuters.com/world/asia-pacific/south-korean-crosses-armed-border-rare-defection-north-2022-01-02 on the eastern side of the Demilitarised Zone (DMZ) separating the two Koreas.

“The authorities presume the person is a North Korean defector and are in the process of verifying related facts,” the Ministry of National Defence said in a statement on Monday.

A ministry official later told reporters they believe the man, who is his 30s, came to the South in November 2020.

“Footage showed he had a identical look and dress as the person who defected from the North in 2020,” the official said.

Investigators are seeking to determine whether weekend movement detected on the northern side of the border was North Korean troops coming to escort the man, but that at this time the South Korean government does not think it is a case of espionage, the official added.

South Korean media have reported the man had experience as a gymnast that helped him scale the fences, but the official said they could not confirm that.

The official said North Korea has acknowledged the South’s messages on inter-Korean hotlines about the incident, but has not provided any more details about the man’s fate.

The border crossing https://tmsnrt.rs/3Hp9VrY, which is illegal in South Korea, came as North Korea carries out strict anti-coronavirus measures since shutting borders in early 2020, though it has not confirmed any infections.

In September 2020, North Korea apologised after its troops shot dead a South Korean fisheries official who went missing at sea and burned his remains, in what it said were anti-pandemic precautions.

Two months earlier, North Korea had declared a national emergency and sealed off a border town after a North Korean defector with reported COVID-19 symptoms illegally crossed back from the South.

While thousands of North Koreans have settled in the South, crossings of the DMZ are rare, with most defectors making their way through China.

Defections from South to North across the DMZ are rarer still, with just a handful recorded in recent years.

However, several recent incidents have raised concerns in South Korea over security lapses or delayed responses by troops guarding the border.

When the suspected defector crossed from North Korea in 2020, he was not detained until 14 hours after he crossed the border, prompting a vow from South Korea’s military to beef up security.

In Saturday’s case, the person’s presence near the border went unnoticed for nearly three hours after CCTV cameras recorded the person scaling a fence and tripping alarms, the military said in a briefing on Sunday.

South Korean troops launched a search operation after spotting the person at 9:20 p.m., but could not stop their crossing into the North at around 10:40 p.m.

In June, South Korea announced it would fast-track the acquisition of a rail-mounted robot, and an artificial intelligence-enabled video and audio system, to boost security along the border.