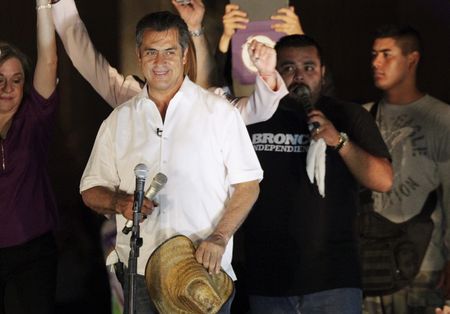 MEXICO CITY (Reuters) – A former governor of Mexico’s Nuevo Leon state was arrested Tuesday for his alleged participation in electoral crimes, according to the state attorney general.

Rodriguez, or “El Bronco” as he is known in Mexico, was an independent candidate in the 2018 election, ultimately won by current President Andres Manuel Lopez Obrador.

Mexico’s electoral authority fined Rodriguez before the election for allegedly raising almost $700,000 in illicit campaign funds, an accusation he denied at the time.

Rodriguez was arrested for his “probable participation in events with characteristics of electoral crimes,” the attorney general said in a statement, identifying Rodriguez as C. Jamie Heliodoro “N”.

An attorney for Rodriguez could not be immediately reached.

“The investigated person will remain in custody in a state social reintegration center at the disposal of a judge who will resolve his legal situation,” the statement said.

The statement did not give further details about the charges against him.