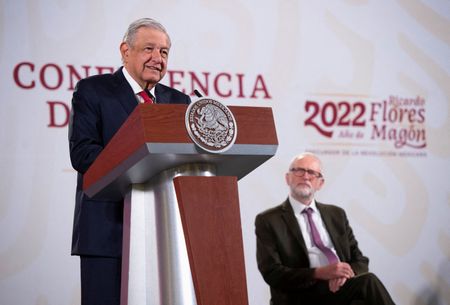 Lopez Obrador, a fellow leftist, has for several years maintained a friendship with Corbyn, who attended the news conference with Laura Alvarez, his Mexican wife.

“We identify with each other because Jeremy is a defender of just causes, he’s a defender of workers in the United Kingdom,” said Lopez Obrador, who also expressed admiration for the confrontational debating style of the British parliament.

Corbyn, wearing a tie and an olive green suit, and Alvarez sat on a stage in the National Palace in Mexico City, where Lopez Obrador holds news conferences from 7 a.m. daily.

Lopez Obrador has on a few occasions hosted heads of state from allies of Mexico or visiting dignitaries at his news conferences, but the reception accorded Corbyn was unusual for a politician who is no longer a party leader.

Corbyn was invited to comment on the morning conferences, which Lopez Obrador has used to set the news agenda, often strongly supported by journalists sympathetic to his administration, as well as to hit back against critics.

After saying a few words in Spanish, Corbyn said the fact Lopez Obrador held the news conferences was “very impressive and shows a degree of openness in government which is not … found in many countries, indeed anywhere at all in the world.”

Speaking at what was Lopez Obrador’s first news conference of the year, Corbyn said he was also impressed with many of the changes under way in Mexico, praising Lopez Obrador’s efforts to tackle chronic poverty and inequality.

Corbyn attended Lopez Obrador’s inauguration in December 2018, while Lopez Obrador visited the British parliament with the then Labour leader in 2017.