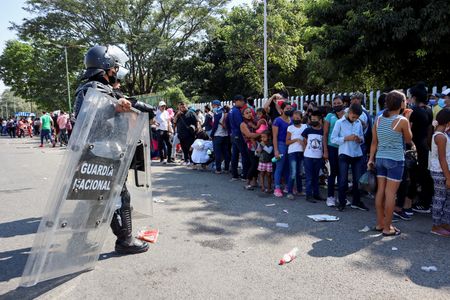 Many of the migrants, some families with children, had been waiting in Tapachula camp for months, which some described as a “prison” due to the squalid or cramped conditions. Mexican authorities have used the camp to contain migrants and restrict their movement.

Before officials disbanded the camp in Tapachula, about 3,000 migrants were granted permission by Mexico’s National Migration Institute (INM) to process their travel documents, which would allow them to leave the camp.

Migrants, mostly from Central America and the Caribbean, left the camp after INM officals gave them a QR code, registering them to complete their “regularization” process.

They will now have a month to complete their visa process, which could include applying for asylum, in one of 14 states, according to a government official and migrants who showed Reuters their documents. Migrants will need to find their own housing.

“I am going to Sinaloa to get the humanitarian visa with my own resources,” said a woman from Cuba who declined to give her name. She said she stayed at the camp for more than two weeks waiting on her QR code so she could continue on her way to the United States.

Mexico accelerated the transfer of tens of thousands of migrants to various regions this month, promising to regularize their stay amid a record number of people arriving in the country in 2021 with the aim of crossing the border into the United States.

There were, however, dozens of migrants who said they had not received a QR code on Thursday, but were still forced to leave the camp. It is unclear if housing assistance will be provided.

Lester Centeno, 25, a migrant from Nicaragua, said he arrived in Tapachula seeking asylum but didn’t get a QR code or a transfer to another region.

“They told me they were going to deport me if I didn’t leave here (from the camp),” Centeno said, referring to immigration agents.

(This story was refiled to add editing credit)