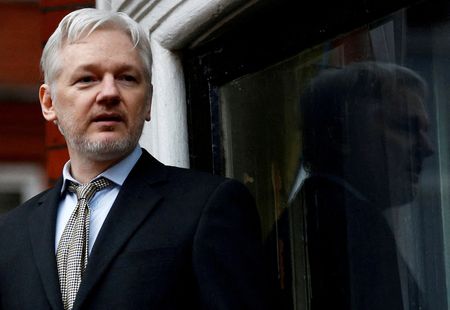 MEXICO CITY (Reuters) – Mexican President Andres Manuel Lopez Obrador said he had sought a pardon for Julian Assange from former U.S. President Donald Trump before he left office last year and repeated his offer of asylum for the Wikileaks founder on Monday.

Last month, the Australian-born Assange moved closer to facing criminal charges https://www.reuters.com/world/us/united-states-wins-appeal-over-extradition-wikileaks-founder-assange-2021-12-10 in the United States for one of the biggest leaks of classified information after Washington won an appeal over his extradition in an English court.

U.S. authorities accuse Assange of 18 counts relating to WikiLeaks’ release of confidential U.S. military records and diplomatic cables which they said had put lives in danger.

Lopez Obrador reiterated the asylum offer he had made for Assange a year ago https://www.reuters.com/article/us-wikileaks-assange-mexico-idUSKBN2991RW, and said that before Trump was replaced as U.S. president by Joe Biden last January, he had written him a letter recommending that Assange be pardoned.

Mexico did not receive a reply to the letter, Lopez Obrador told a regular government news conference.

“It would be a sign of solidarity, of fraternity to allow him asylum in the country that Assange decides to live in, including Mexico,” Lopez Obrador said.

If granted asylum in Mexico, Assange would not be able to interfere in the affairs of other countries, and would not represent any sort of threat, Lopez Obrador added.

More hurdles remain before Assange could be sent to the United States after an odyssey which has taken him from teenage hacker in Melbourne to years holed up in the Ecuadorean embassy in London and then incarcerated in a maximum-security prison.

Supporters of the 50-year-old Assange cast him as an anti-establishment hero who has been persecuted by the United States for exposing U.S. wrongdoing and double-dealing across the world from Afghanistan and Iraq to Washington.