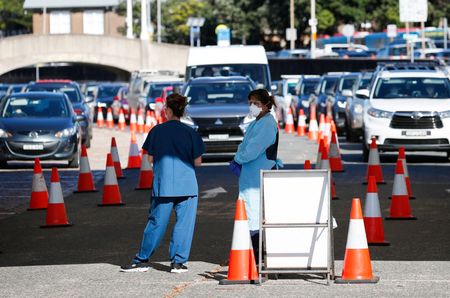 SYDNEY (Reuters) – New Australian COVID-19 cases dipped on Sunday as testing slowed over a holiday weekend, but remained well over 30,000 and hospitalisations rose further in New South Wales as concerns grow about potential strains on the national health system.

Newly diagnosed cases in New South Wales, the most populous state, dropped to 18,278 from 22,577 the day before as the number of tests conducted on New Year’s Day dropped by a quarter, health department figures showed.

But hospitalisations, which authorities have signalled is a figure they are more closely monitoring than total case numbers as they shift towards living with the virus, jumped by 18% to 1,066.

“As we enter a new year, we are entering a new battle against COVID-19,” Queensland state Treasurer Cameron Dick said.

“If we can slow the spread of the virus, that takes the pressure off our health system in particular,” Dick said, asking people to get vaccinated and get booster shots, wear masks in indoor settings and work from home if possible.

With only Western Australia and the Northern Territory still to report figures on Sunday, the national tally of new cases was more than 32,200, below Saturday’s record of 35,327.

All Australian states, except for Western Australia, have begun to live with the virus as vaccination levels have risen, and the easing in restrictions has pushed cases higher.

There were five deaths reported in New South Wales and Victoria, bringing the national death toll throughout the pandemic to almost 2,260 people.