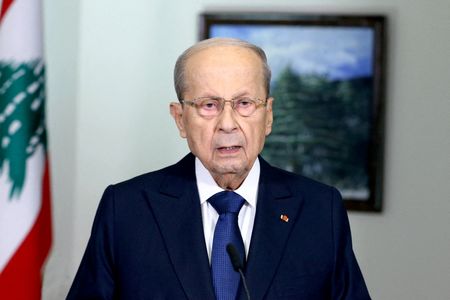 By Laila Bassam and Maya Gebeily

BAABDA, Lebanon (Reuters) -Outgoing Lebanese President Michel Aoun told Reuters on Saturday his nation could be sliding into “constitutional chaos”, with an unprecedented situation of having no one in line to succeed him and a cabinet that is operating in a caretaker capacity.

Aoun is set to leave the presidential palace on Sunday, a day before his six-year term ends, but four sessions in the nation’s fractured parliament have failed to reach consensus on a candidate to succeed him.

Aoun said in an interview an 11th-hour political move to address the constitutional crisis might be possible, but added “there is no final decision” on what that could involve.

Aoun’s presidency is inextricably linked in the minds of many Lebanese to their country’s worst days since the 1975-1990 civil war, with the financial crisis that began in 2019 and the deadly Beirut port blast of 2020.

In the days after the blast, Aoun said he had received a report about the roughly 2,700 tonnes of ammonium nitrate stored at the port of Beirut weeks before they detonated and killed some 220 people.

He declined to comment on the blast on Saturday.

Aoun’s son-in-law Gebran Bassil, who was put on a sanctions list by the United States in 2020 for alleged corruption, has presidential ambitions, according to political sources.

Bassil has denied the allegations of corruption, and Aoun said on Saturday the sanctions would not stop Bassil from eventually being a presidential candidate.

“Once he’s elected (as president), the sanctions will go away,” Aoun said, without elaborating.

In his final week as president, Aoun signed a U.S.-brokered deal delineating Lebanon’s southern maritime border with Israel – a modest diplomatic breakthrough that would allow both countries to extract natural gas from maritime deposits.

He said powerful Iran-backed armed group Hezbollah, which sent unarmed drones over Israel and threatened to attack its offshore rigs multiple times, had served as a “deterrent” that had helped keep the negotiations going in Lebanon’s favour.

“It wasn’t coordinated (with the government). It was an initiative taken by Hezbollah and it was useful,” Aoun said, adding that the Lebanese army “had no role” in this regard.

He said the deal paved the way for gas discoveries that could be Lebanon’s “last chance” at recovering from a three-year financial meltdown that has cost the currency 95% of its value and pushed 80% of the population into poverty.

Lebanon has otherwise made slow progress on a checklist of reforms required to gain access to $3 billion in financing from the International Monetary Fund.

Aoun said he would stay involved in politics in Lebanon even after he leaves office, particularly to fight Central Bank governor Riad Salameh, one of the president’s main political adversaries.

Salameh is being in investigated in Lebanon and at least five countries abroad on charges of corruption and embezzlement of public funds, charges he denies.