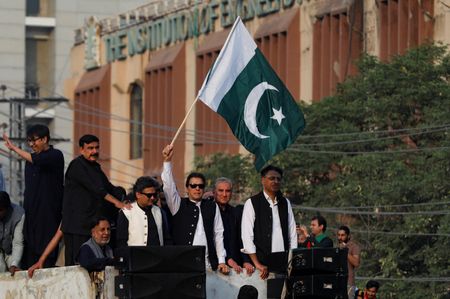 LAHORE, Pakistan (Reuters) – Pakistan’s former prime minister Imran Khan gathered hundreds of supporters in the eastern city of Lahore on Friday to join a caravan of cars and trucks heading for the capital Islamabad to pressure the government into calling snap polls.

Since being ousted in April through a parliamentary vote, Khan has held rallies across Pakistan, stirring opposition against a government that is struggling to bring the economy out of the crisis that Khan’s administration left it in.

Khan plans to lead the motorised caravan slowly northwards up the Grand Trunk Road to Islamabad, drawing more support along the way before entering the capital in a week.

By the time he gets there, Khan said he expects to have hundreds of thousands of people with him, and his Pakistan Tehreek-e-Insaf (PTI) party has asked authorities in the capital to allow a protest sit-in.

“I want that all of you participate. This is not for politics or personal gain, or to topple the government… this is to bring genuine freedom to the country,” Khan said in a video message on the eve of the march.

PTI members told journalists on Friday that the party was willing to negotiate with Prime Minister Shehbaz Sharif’s coalition government if it announced a date for a snap election.

The government says polls will be held as scheduled in October next year. Khan says he is not willing to wait.

The growing crowd of Khan supporters in Lahore chanted slogans including “Imran Tere Jannisar, Beshumar, Beshumar”, meaning “Imran, countless people are willing to give their life for you”.

Laila, a mother of two from Toba Tek Singh, a city in the eastern province of Punjab, echoed those sentiments.

“I have come to Lahore to join the long march with my husband and two sons aged nine and 11. I am not concerned about security as Khan is struggling for a better future for my children,” she said, adding that she and her family would go to Islamabad and stay till the end.

As Khan’s supporters assembled in Lahore, large numbers of police were deployed along the 260-kilometres (160-mile) route to Islamabad.

Khan has used this tactic before – most recently in May, weeks after he lost power. But that time police used tear gas after clashing with Khan’s supporters as they approached Islamabad’s sensitive “red zone”, and the rally quickly dispersed.

This time Khan has called on protesters to stay peaceful, and given assurances that he would not enter the ‘red zone’ and the protest remain in areas designated by the courts and local administration, but given the politically charged environment the fears of violence persist.

COLD SHOULDERED BY THE GENERALS

The federal government, which runs Islamabad, has indicated that any deviation from approved protest plans will be met with force from the city’s police.

Khan’s party is in government in two of Islamabad’s neighbouring provinces, Punjab and Khyber-Pakhtunkwa, and the provincial police forces are expected to be providing security to marchers.

With security enhanced in the capital and augmented by paramilitary forces, there is a fear that the forces could come face to face.

Crucially, Khan lacks backing from Pakistan’s powerful military, which has directly ruled the country for more than three of the seven-and-a-half decades since independence.

Having once been regarded as close to the generals, Khan has accused the military of supporting his opponents move to oust him. The country’s powerful military says it is staying out of politics, and on Thursday the intelligence chief accused Khan of asking for “illegal and unconstitutional” support for his government.