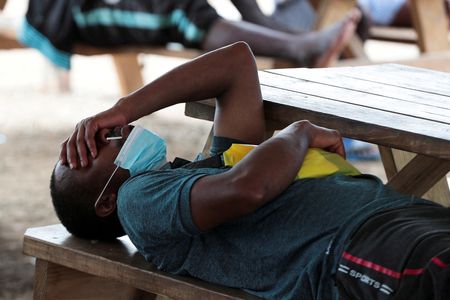 PANAMA CITY (Reuters) – A record wave of unauthorized migrants entered Panama this year from Colombia, according to government data provided to Reuters on Thursday, as a surge of mostly Haitians entered the Central American country in route to the United States.

Through mid-December, 126,675 unlawful migrants had entered Panama after crossing the Darien Gap, a remote stretch of jungle on the border between Panama and Colombia, according to the latest security ministry data.

The 2021 figure marks a massive jump compared to the previous year, when less than 9,000 migrants crossed into Panama from Colombia without legal authorization.

In fact, the 2021 wave of migrants is greater that the combined figure of the previous 11 years, when a total of around 118,000 unlawful migrants crossed into Panama from Colombia, according to official data.

Record numbers of migrants have been apprehended at the U.S.-Mexico border this year, largely comprised of Central Americans as well as Haitians who fled extreme poverty, gangland violence and natural disasters in their home countries.

Panamanian Security Minister Juan Pino said earlier this week that he expects to trend to continue, due in large part to pandemic-related economic hardships.