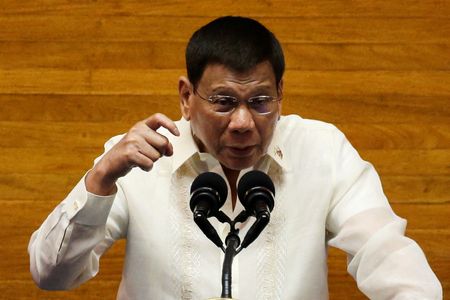 MANILA (Reuters) – Philippines President Rodrigo Duterte said on Tuesday he will never apologise for the deaths of suspected drug users and dealers killed in police operations under his war on drugs that has alarmed rights groups.

Duterte, in his first national address this year, vowed to protect law enforcers doing their duty, telling them to fight back when their life is in danger.

Duterte, 76, won the presidency by a wide margin in 2016 on a platform of anti-corruption and law and order.

The firebrand leader is constitutionally barred from seeking re-election next year. Analysts say an ally getting elected could protect Duterte from any legal action over his anti-narcotics programme.

Judges at the International Criminal Court (ICC) in September approved a formal investigation https://www.reuters.com/world/asia-pacific/international-court-approves-investigation-into-philippines-war-drugs-2021-09-15 into Duterte’s war on drugs. The ICC suspended https://www.reuters.com/world/asia-pacific/icc-prosecutor-suspends-probe-into-philippines-drugs-war-2021-11-19 the probe in November following a request by the Philippines, which cited its own investigations.

Duterte unilaterally cancelled the Philippines’ ICC membership in March 2018, a month after its prosecutor said a preliminary examination over the drugs war was under way.