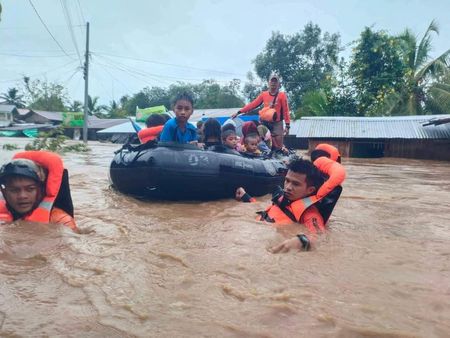 MANILA (Reuters) -Philippine search and rescue teams pulled bodies from water and thick mud on Friday, bringing to 42 the death toll from flooding and landslides triggered by a storm, with dozens more feared buried.

Eleven bodies were retrieved in the southern province of Maguindanao, which was hit hard by approaching tropical storm Nalgae, said Naguib Sinarimbo, interior minister of the Bangsamoro Autonomous Region in Mindanao (BARMM).

Rescue and retrieval operations are temporarily suspended overnight and will resume Saturday morning, Sinarimbo said, as more people were feared still trapped under mud and flood waters, particularly in the town of Datu Odin.

“Based on the assessment on the ground, at that specific site, there were many (who got buried). The number might hit 80, but we are hoping it won’t reach that number,” Sinarimbo said via phone.

Authorities have evacuated thousands of people out of the path of Nalgae, which could possibly make landfall Friday night in Samar province in central Philippines, disaster officials said.

Sinarimbo said the rainfall in Maguindanao province had exceeded expectations.

“There were preparations made but unfortunately, the rainfall was more than what people had expected,” Sinarimbo said.

In another southern province, Sultan Kudarat, rescue workers used rubber boats to get to residents trapped in chest-deep waters, images shared by the coast guard showed.

Landslides and floods are frequent in the Philippines, due in part to the growing intensity of tropical cyclones that regularly batter the country. The Philippines sees an average 20 typhoons a year.

Tropical storm Nalgae, packing winds of 75 km (47 miles) per hour, forced flight cancellations just as thousands of people were planning to travel to their home towns to observe All Souls Day. Schools were also shut down and some ports saw operations paralysed.

The storm could intensify further while moving over the Philippine Sea, the weather bureau said.