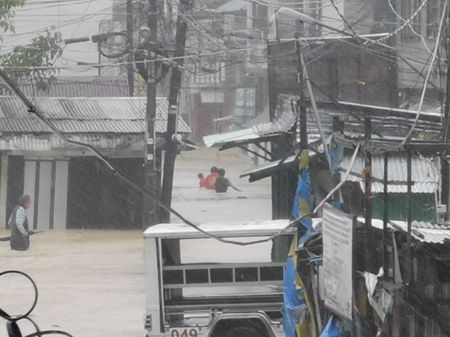 MANILA (Reuters) – Philippines President Ferdinand Marcos Jr on Saturday ordered urgent aid distribution in a southern province where landslides have been triggered by Tropical Storm Nalgae, which has killed 45 people across the country so far.

Heavy rains and strong winds pounded the capital, Manila, and surrounding areas for most of Saturday as Nalgae forced tens of thousands of people to leave their homes and disrupted peak holiday travel in much of the nation.

Nalgae is the second deadliest cyclone to hit the Philippines this year, with the disasters agency reporting 45 deaths, mostly in hard-hit Maguindanao province. Another 33 people have been injured and 17 are registered missing.

“We could have done better in Maguindanao in terms of preparing. The 40 deaths, with 10 people missing there is a little too high,” Marcos said in a briefing with disaster officials.

He ordered the immediate distribution of drinking water and purifying systems to the province and other parts of the badly affected southern Philippines.

In the country’s capital region, which includes Manila and other cities, flooding prompted authorities to suspend classes and sports events.

Airlines have cancelled 116 domestic and international flights to and from the Philippines’ main gateway, which stopped operations from 0800 to 1400 GMT because of strong winds, the transport ministry said.

Nearly 7,500 passengers and workers, and 107 vessels, were stranded in the country’s ports, the coast guard said.

Manila Mayor Honey Lacuna-Pangan on Saturday ordered the closure of the city’s cemeteries, where millions had been expected to visit during the extended All Saints’ Day weekend.

Nalgae has maintained its strength, with maximum winds of 95 kilometres (60 miles) per hour and gusts of up to 115 kph (71 mph) as it cut through the main Luzon island and headed to the South China Sea, the state weather agency said.

Another tropical depression gaining strength in the Pacific Ocean could enter Philippine territory on Tuesday, it added.

Almost 170,000 people have been forced from their homes by the storm, nearly a third of whom were sheltering in evacuation centres, government data showed.

In the central Leyte province, coast guard personnel led residents through chest-deep floodwaters, with rescuers using a plastic chair and an old refrigerator to float children and elderly people to safety, photos shared by the weather agency showed.

Marcos said the aid response should be stepped up once Nalgae exits land areas – on Sunday morning, according to the latest forecasts.

“Let us not wait for the helicopters and air assets to fly. If the weather is not good, look for more ways to deliver relief goods, water and medicines,” he said.