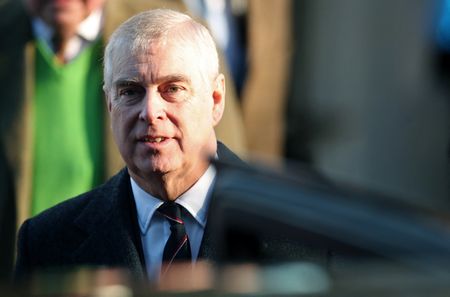 By Luc Cohen and Jonathan Stempel

NEW YORK (Reuters) – A woman who has sued Britain’s Prince Andrew for sexual abuse agreed in a 2009 civil settlement with Jeffrey Epstein to restrictions on her ability to sue others, language that could potentially impact whether the lawsuit against the prince goes forward.

The settlement was made public on Monday as part of Virginia Giuffre’s 2021 civil lawsuit against Andrew, whom she accuses of forcing her to have sex two decades ago when she was 17. Andrew has denied the accusation and said Giuffre’s 2009 deal with Epstein shields him from any liability.

The deal also provided for Giuffre, also known as Virginia Roberts, to be paid $500,000.

It will now be up to U.S. District Judge Lewis Kaplan in New York to determine whether the clause in the 2009 pact blocks Giuffre’s lawsuit against Andrew. The litigation is in its early stages, and Kaplan has said it could go to trial between September and December of 2022 if no settlement is reached.

A hearing over Andrew’s motion to dismiss the civil lawsuit is scheduled for Tuesday.

Giuffre in May 2009 sued Epstein, alleging he sexually assaulted her in 1998 when she was 15. She also said that she was “required to be sexually exploited by (Epstein’s) adult male peers, including royalty, politicians, academicians” and others. The lawsuit was dismissed in December 2009.

Andrew argued in a 2021 court filing that the settlement agreement shielded him from liability because he fell into the category of “royalty” from liability. Andrew said the settlement was intended to protect “any and all persons who Giuffre identified as potential targets of future lawsuits.”

The agreement released on Monday in federal court in Manhattan said “any other person or entity who could have been included as a potential defendant from all, and all manner of, action and actions of Virginia Roberts” was released from liability.

Andrew’s lawyers on Monday declined comment on the filing.

David Boies, an attorney for Giuffre, called the liability release “irrelevant” to Giuffre’s claim against Andrew.

“The release does not mention Prince Andrew. He did not even know about it,” Boies said in a statement. “The reason we sought to have the release made public was to refute the claims being made about it by Prince Andrew’s PR campaign.”

Giuffre said in her lawsuit against Andrew that he forced her to have sex at the London home of former Epstein associate Ghislaine Maxwell and at two of Epstein’s homes.

Andrew, 61, has moved to dismiss the lawsuit, arguing Giuffre is seeking a “payday” from her accusations against Epstein and his associates. The prince has not been accused of criminal wrongdoing.

Epstein killed himself in a Manhattan jail cell in 2019 at the age of 66 while awaiting trial on sex abuse charges.

Andrew gave up many royal duties in November 2019, saying that his association with Epstein had become a “disruption to my family’s work.”

Giuffre’s lawsuit is separate from the criminal trial against Maxwell that concluded last week. Maxwell, 60, was convicted https://www.reuters.com/world/us/maxwell-jury-resume-deliberations-after-judge-warns-omicron-risk-2021-12-29 of recruiting and grooming girls for Epstein to abuse between 1994 and 2004.

Giuffre’s claims did not form the basis of any of the charges Maxwell faced and she did not testify for either side during the three-week criminal trial.