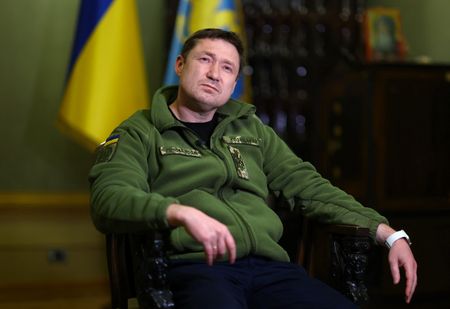 LVIV, Ukraine (Reuters) – In his grandparents’ time, said Maksym Kozytsky, there was a saying: In every cellar you should hide a gun to fight the Russians.

Today, Kozytsky, 41, sits in a semi-fortified building in Lviv, a city in western Ukraine, where as regional governor he is preparing his country’s most emphatically pro-European region for the possible arrival of Russian soldiers.

Lviv, a city of trams and cobblestone streets, has not come under attack since Russia launched its invasion of Ukraine last week.

But hundreds of thousands of people fleeing war in eastern Ukraine have poured through Lviv – the largest city in the country’s west – and the region that shares its name. Lviv has become not just a refuge, but a staging area for humanitarian aid and soldiers pouring back into Ukraine’s war zone.

“We have always known the Russians are not our brothers,” said Kozytsky. “It’s time for people to get ready.”

Nearby his office, in the city’s old quarter, locals wrapped statues in padded material to protect them from being damaged by any future shelling.

For now, he said, the Russians were preoccupied with their assault on Ukraine’s eastern cities, including the capital Kyiv.

“They lack the forces to open another front,” he said. “Their first and foremost job is to take the capital, since the legitimate government and president of Ukraine are located there.”

Asked if the Russians will then attack Lviv, he replied: “No chance – because they will not take Kyiv.”

Despite days of bombardment by Russia, Ukrainian soldiers and civilians have resisted the Russian invasion, and Kyiv and other major cities remained in their hands on Thursday evening.

Kozytsky wears a military jacket but is not a soldier. He trained as a surgeon, then left medicine for business. Until his appointment as governor two years ago, he was director of Eco-Optima, which describes itself as the largest renewable energy company in western Ukraine.

Now instead of building wind farms, Kozytsky is helping the region of 2.5 million people prepare to resist Russia’s invasion. The crisis has also transformed IT managers and restaurateurs into aid workers and soldiers.

Kozytsky said his 17-year-old son was volunteering at Lviv train station, where thousands of Ukrainians and other nationalities have come.

He sits in a lofty office the size of two squash courts, at a desk containing an antiquated telephone and a pristine copy of “A Journey: My Political Life” by former UK Prime Minister Tony Blair.

Kozytsky said he welcomed the thousands of volunteers from other countries who were heading to Lviv to fight alongside Ukrainians, but Russian soldiers would get a very different reception.

“We are ready to receive them,” he said, adding with a steely look: “But it would be better for them if they didn’t come.”