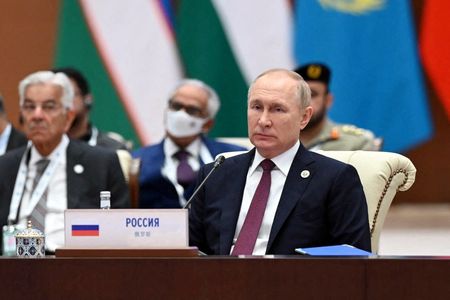 SAMARKAND, Uzbekistan (Reuters) – Russian President Vladimir Putin said on Friday that despite the Ukraine conflict, Moscow had enough resources to mediate in a conflict between Armenia and Azerbaijan after a series of border skirmishes.

The fighting ended in a ceasefire two days ago after more than 200 people were killed in fighting linked to a decades-old struggle over the disputed enclave of Nagorno-Karabakh.

Azerbaijani President Ilham Aliyev told Putin on Friday that the conflict had “stabilised.”

Both sides blame each other for the deadliest clashes between them since a six-week war over Karabakh in 2020 left thousands dead.

Russia is a military ally of Armenia which also strives for friendly relations with Azerbaijan.

“Under the influence of Russia, this conflict was localized. I hope this continues to be the case,” Putin told reporters after a regional summit in Uzbekistan.

Asked whether Russia had the resources to maintain its influence in the region given Moscow’s focus on the conflict in Ukraine, he replied: “As you can see, there are enough.”

But in a sign of potential challenges, a senior Armenian official expressed unhappiness with the response of a Russian-led military alliance to Yerevan’s request for help, Interfax news agency reported.

Armenia asked the Moscow-led Collective Security Treaty Organisation (CSTO) to intervene, but so far it has just sent a fact-finding team to the region.

“We are very dissatisfied, of course. The expectations we had were not justified,” parliamentary speaker Alen Simonyan told national television, likening the CSTO to a pistol that did not shoot bullets, Interfax said.

Noting Armenia also had a treaty on mutual assistance with Russia, he said “we expect more tangible steps from our Russian partners, not just statements or half words.”

Macron’s office said he had reaffirmed French support for the territorial integrity and sovereignty of Armenia.

U.S. House of Representatives Speaker Nancy Pelosi on Friday confirmed she would make a snap visit to Armenia this weekend.