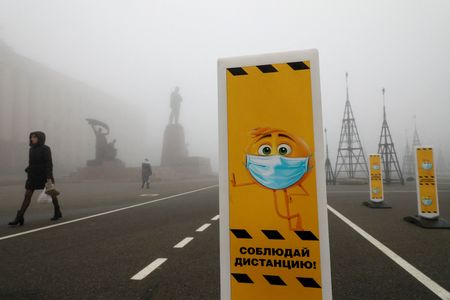 By Polina Nikolskaya and Anton Zverev

MOSCOW (Reuters) – Russia is bracing itself for another COVID-19 wave early next year, sparked largely by the spread of the highly contagious Omicron strain that has spooked markets and lawmakers in recent weeks, three sources in political circles told Reuters.

“There is the expectation of a new wave in January-February,” said a source close to the Kremlin said, adding that daily infections of more than 50,000 were possible.

Two regional government sources said the prospect of a new wave at the start of next year had been discussed at government meetings.

Russia’s daily COVID-19 cases have been declining since reaching a peak of 41,335 in early November, and though wide-ranging restrictions to combat the spread of Omicron have not been introduced, authorities have urged caution ahead of Russia’s long New Year holidays.

“We are looking at Omicron and so far the understanding is that the disease is milder than Delta,” the source close to the Kremlin said, adding that the task of ensuring hospital bed capacity was under way.

“But again, the expectation is that Omicron may lead to fewer hospitalisations than Delta, people will just sit at home.”

The Kremlin has frequently expressed frustration at the slow public uptake of the Russian-made Sputnik V vaccine. Russia’s collective immunity against COVID-19, which the government’s coronavirus task force measures using data on vaccinations and infections, stood at 61.8% as of Dec. 30.

A health adviser to a governor in central Russia said another wave was expected in early 2022.

“We expect a new wave at this time, we are waiting for our compatriots to return from abroad with Omicron after New Year,” the adviser said.

A different source in the government of a northern region told Reuters the new wave had been discussed at meetings with Health Minister Mikhail Murashko and Deputy Prime Minister Tatiana Golikova, but that it may not be too strong as Omicron symptoms could be less severe.

“We understand that Omicron will come to Russia, it is inevitable,” Popova said in an interview with state television.

On Tuesday, Popova said the risk of spreading Omicron would certainly increase after the New Year holidays, which run from Jan. 1-9.

“We can expect the epidemiological situation to worsen after these holiday days,” she said.

The Health Ministry and coronavirus task force were not immediately available for comment.