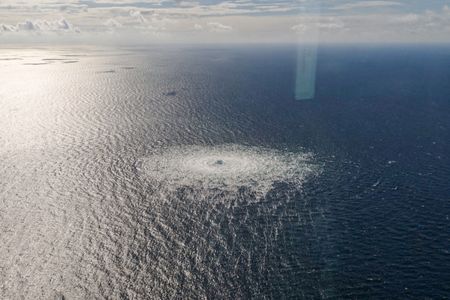 By Guy Faulconbridge and Sachin Ravikumar

Russia did not give evidence for its claim that a leading NATO member had sabotaged critical Russian infrastructure amid the worst crisis in relations between the West and Russia since the depths of the Cold War.

The Russian ministry said that “British specialists” from the same unit directed Ukrainian drone attacks on ships of Russian Black Sea fleet in Crimea earlier on Saturday that it said were largely repelled by Russian forces, with minor damage to a Russian minesweeper.

“According to available information, representatives of this unit of the British Navy took part in the planning, provision and implementation of a terrorist attack in the Baltic Sea on September 26 this year – blowing up the Nord Stream 1 and Nord Stream 2 gas pipelines,” the ministry said.

“To detract from their disastrous handling of the illegal invasion of Ukraine, the Russian Ministry of Defence is resorting to peddling false claims of an epic scale,” the British defence ministry said.

“This invented story, says more about arguments going on inside the Russian government than it does about the West.”

Maria Zakharova, a spokeswoman for Russian foreign ministry, said Moscow will seek reaction from the U.N. Security Council saying on social media Moscow wanted to draw attention to “a series of terrorist attacks committed against the Russian Federation in the Black and Baltic Seas, including the involvement of Britain in them”.

Russia, deeply isolated by Western nations since its Feb. 24 invasion of Ukraine, has previously blamed the West for the explosions that ruptured the Russian-built Nord Stream 1 and Nord Stream 2 pipelines on the bed of the Baltic Sea.

But it had not previously given specific details of who it thinks was responsible for the damage to the pipelines, previously the largest routes for Russian gas supplies to Europe.

A sharp drop in pressure on both pipelines was registered on Sept. 26 and seismologists detected explosions, triggering a wave of speculation about sabotage to one of Russia’s most important energy corridors.

Reuters has not been able to immediately verify any of the conflicting claims about who was to blame for the damage.

Sweden and Denmark have both concluded that four leaks on Nord Stream 1 and 2 were caused by explosions, but have not said who might be responsible. NATO Secretary-General Jens Stoltenberg has called the damage an act of sabotage.

Sweden has ordered additional investigations to be carried out into the damage done to the pipelines, the prosecutor in charge of the case said in a statement on Friday.

The Kremlin has repeatedly said allegations of Russian responsibility for the damage were “stupid” and Russian officials have said Washington had a motive as it wants to sell more liquefied natural gas (LNG) to Europe.

The United States has denied involvement.

The Nord Stream 1 and Nord Stream 2 pipelines have a joint annual capacity of 110 billion cubic metres – more than half of Russia’s normal gas exports volumes.

Russia said meanwhile that Ukrainian forces attacked ships from the Black Sea Fleet in Sevastopol, the biggest city in Russian-annexed Crimea, in the early hours of Saturday.

“The preparation of this terrorist act and the training of servicemen of the Ukrainian 73rd Special Center for Naval Operations were carried out under the guidance of British specialists located in the town of Ochakiv.”

All the air drones were destroyed though minor damage was done to the minesweeper Ivan Golubets, the ministry said. Sevastopol is the headquarters of Russia’s Black Sea Fleet.

(Reporting by Reuters; Editing by Guy Faulconbridge and Frances Kerry)