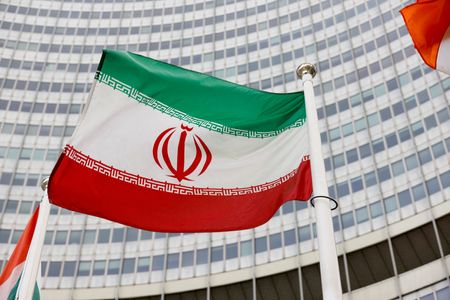 By Humeyra Pamuk and Miranda Murray

WASHINGTON/BERLIN (Reuters) -Top U.S. and Russian officials for Iran have met in Vienna, a Russian envoy said on Wednesday, and delegates on both sides said Moscow and Washington were coordinating in a bid to salvage the 2015 Iran nuclear deal.

Mikhail Ulyanov, Russia’s envoy to talks on the nuclear pact, wrote on Twitter that he had met twice on Wednesday with the U.S. special envoy to Iran, Robert Malley, posting pictures of himself and the U.S. diplomat sitting across from a long table.

The State Department, when asked about the meeting, said it does not discuss the details of diplomatic conversations.

“Close consultations and coordination between the Russian and the U.S. delegations in the course of the Vienna talks constitute an important prerequisite for progress towards restoration of the JCPOA,” he wrote, referring to the Joint Comprehensive Plan of Action nuclear deal.

“We maintain intensive and, I believe, useful dialogue in the course of the #ViennaTalks on concrete way and means of restoration of the #JCPOA,” Ulyanov tweeted, after what he said was his second meeting with Malley.

Separately, U.S. Secretary of State Antony Blinken has held a phone call with his French, German and British counterparts and Iran nuclear talks were among the topics discussed, State Department said.

“The Secretary and his counterparts also discussed their shared concerns about the pace of developments in Iran’s nuclear program as time runs short for Tehran to return to the JCPOA,” Department spokesperson Ned Price said in a statement about the call.

The 2015 JCPOA lifted sanctions against Tehran in exchange for restrictions on its atomic activities but Donald Trump pulled Washington out of the deal in 2018, a year after he became U.S president. Iran later breached many of the deal’s nuclear restrictions and kept pushing well beyond them.

The latest round of indirect talks between Iran and the United States resumed on Monday in Vienna, with Tehran focused on getting U.S. sanctions lifted again, despite scant progress on reining in Iran’s atomic activities.

U.S. President Joe Biden and Russian President Vladimir Putin were likely to discuss the Iran nuclear talks on Thursday, a senior Biden administration official said, when they are due to have a virtual meeting.

“I do believe that they’re (Biden and Putin) likely to discuss it (Iran) again tomorrow given that we have ongoing talks in Vienna now and the U.S., our European partners and the Russians have been coordinating quite closely in Vienna, working quite constructively together in Vienna,” the U.S. official said.

Iran refuses to meet U.S. officials directly, meaning other parties to the deal besides the United States and Iran – Russia, China, France, Britain, Germany and the European Union – must shuttle between the two sides.

On Thursday, Washington expressed caution over upbeat comments by Iran and Russia about the talks in Vienna, saying it was too soon to say if Tehran had returned to the negotiations with a constructive approach.