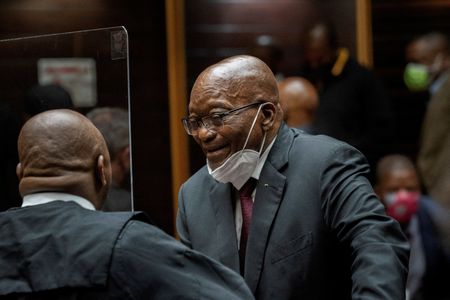 JOHANNESBURG (Reuters) – A South African judicial commission will formally hand over the first part of its report to President Cyril Ramaphosa on Tuesday following its inquiry into corruption during former president Jacob Zuma’s time in power, a Cabinet minister said on Friday.

The inquiry was established to examine allegations of high-level graft during Zuma’s period in power from 2009 to 2018.

The allegations presented against Zuma at the inquiry include “state capture,” accusing him of allowing businessmen close to him – brothers Atul, Ajay and Rajesh Gupta – to plunder state resources and influence policy.

The Guptas, who also deny wrongdoing, left South Africa after Zuma was ousted in February 2018.

Ramaphosa, Zuma’s No. 2 from May 2014 to the time he took over, has made the fight against corruption a pillar of his presidency, though opposition parties have criticised him for doing too little to stop the rot during his time as deputy.

The judicial commission was due to deliver the first part of its three-part report by the end of this month, but the minister said this was delayed out of respect for the seven-day mourning period for Archbishop Desmond Tutu, who died on Sunday https://www.reuters.com/world/africa/reaction-death-south-africas-desmond-tutu-2021-12-26.

Zuma was sentenced to 15 months in jail for failing to cooperate with the inquiry. He was imprisoned in July and then placed on medical parole in September. The High Court has since ruled that he should go back to jail. Zuma is appealing the decision.