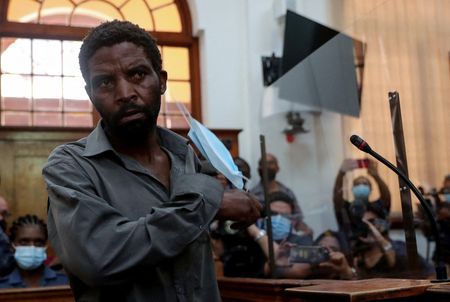 A 49-year-old man accused of setting the fire appeared in court to face five charges including arson and possession of an explosive device. A lawyer for suspect Zandile Christmas Mafe said he denied the accusations and would plead not guilty.

The National Assembly in the New Wing of the parliament complex was “completely destroyed from bottom right through to the top,” Cape Town City Chief Fire Officer Ian Schnetler told journalists. “It is going to take a lot of rehabilitation to get that back to where it was.”

In a statement, city officials said the fire had been brought under control at midnight.

“Teams are now working their way through the maze-like building, room-for-room, as they attempt to locate and extinguish” hot spots, the statement said.

“This is a lengthy process, as some rooms are needing to have their interior wooden cladding pulled apart, in order to identify any concealed hot spots.”

The fire initially broke out on Sunday. By Monday, authorities had withdrawn some fire trucks and said they were putting out embers, only for the flames to flare up again causing more extensive damage to the New Wing.

The fire also caused the partial collapse of the roof of the Old Wing, which dates back to 1884 and houses the upper chamber, the National Council of Provinces.

Eric Ntabazalila, spokesperson for the Western Cape Province’s National Prosecuting Authority, declined to say what kind of explosive device was found with Mafe. Authorities have not disclosed any possible motive for setting the blaze.

“My client denies and rejects these charges and therefore he is pleading not guilty and he will continue to plead not guilty,” Mafe’s lawyer Luvuyo Godla told journalists on the steps of Cape Town Magistrate’s court.

Officials have said important sections of the complex were saved, including a museum with art works and heritage objects, and an embroidered tapestry telling the story of the Eastern Cape on the ground floor of the Old Assembly Building.