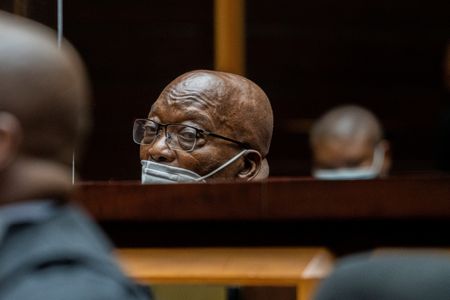 JOHANNESBURG (Reuters) – A South African corruption inquiry pointed to systemic graft during former President Jacob Zuma’s tenure in the first part of its report published on Tuesday, after more than three years of investigations involving more than 300 witnesses.

The inquiry chaired by senior judge Raymond Zondo was established in 2018 to examine allegations of high-level graft during Zuma’s nine years in power from 2009, after scandals and sleaze had overshadowed South Africa’s politics for years.

Zuma denies wrongdoing and has refused to cooperate with the inquiry, leading to his imprisonment in July for contempt of court. He was placed on medical parole in September before being ordered back to jail by the high court – a decision he is appealing.

The allegations levelled against Zuma include that he allowed businessmen close to him – brothers Atul, Ajay and Rajesh Gupta – to plunder state resources and influence policy, in what is widely referred to in South Africa as “state capture”.

The Guptas, who also deny wrongdoing, left South Africa after Zuma was ousted before the end of his second term by now-President Cyril Ramaphosa’s allies on the executive of the governing African National Congress party to which they both belong.

The first instalment of the Zondo commission’s report focused on alleged corruption involving state airline South African Airways (SAA) and related entities, a media company controlled by the Guptas and the revenue service.

On SAA, it said the airline declined into “an entity racked by corruption and fraud” while Zuma was in power. Two former finance ministers told the inquiry that the SAA chairwoman at the time was retained because of the personal preferences of Zuma.

“This is the antithesis of accountability. President Zuma fled the Commission because he knew there were questions that would be put to him which he would not have been able to answer,” the report said. Spokespeople for Zuma and SAA did not immediately answer phone calls seeking comment.

The inquiry found the Guptas employed “a calculated strategy … to appropriate public funds from state-owned enterprises” and said the influence that they exerted over Zuma was “considerable”.

It said the revenue service, SARS, was “systemically and deliberately weakened, chiefly through the restructuring of its institutional capacity, strategic appointments and dismissals of key individuals, and a pervasive culture of fear and bullying”. It cited Zuma and a former SARS commissioner as playing critical roles in dismantling it. SARS did not immediately respond to an e-mailed request for comment.

Addressing public procurement broadly, the inquiry said there were patterns of abuse at every stage and that governance had collapsed at state companies.

It recommended the government publish a national charter against corruption in public procurement, establish an independent anti-corruption agency, ensure protection for whistleblowers and that legislation on political party funding be amended.

Two further parts of the report will be submitted to Ramaphosa by the end of February.

At a ceremony at the Union Buildings, the seat of government, Ramaphosa promised a plan to implement the inquiry’s recommendations by the end of June after Zondo handed him the first part of the report.

Ramaphosa has made tackling corruption a priority since taking over from Zuma, although some opposition politicians have criticised him for doing too little to stop the rot when he was Zuma’s deputy between May 2014 and February 2018.

Zondo declined to comment on the report’s contents at Tuesday’s ceremony.