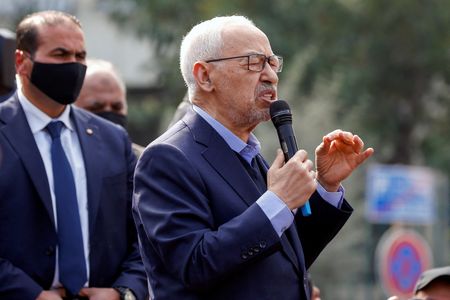 TUNIS (Reuters) – The speaker of Tunisia’s suspended parliament, Rached Ghannouchi, said he had asked President Kais Saied in a letter to reveal the whereabouts and condition of Ennahda party official Noureddine Bhairi, who was arrested on Friday.

Members of the moderate Islamist party said Bhairi had been in poor health, and that they had received information that he had not been allowed to take his regular medication since his arrest.

Pictures and videos published by Ennahda members and supporters on Facebook showed people gathering in front of the hospital in Bizerte, saying Bhairi had been taken there.

The Interior Ministry has not confirmed Bhairi’s arrest, saying only that two unnamed people have been placed under house arrest to protect national security.

No officials in Saied’s administration were immediately available to comment.

Ennahda, which has accused Saied of a coup for suspending parliament in July and accumulating executive powers, said plainclothes agents had seized Bhairi on Friday morning.

Since Saied’s intervention, several senior politicians and business leaders have been detained or prosecuted, many of them on charges of corruption or defamation.

Rights groups have criticised some of those arrests and the use of military courts to hear cases.

Saied has promised to uphold the rights and freedoms won in Tunisia’s 2011 revolution, which ushered in democracy and triggered “Arab Spring” uprisings across the region.