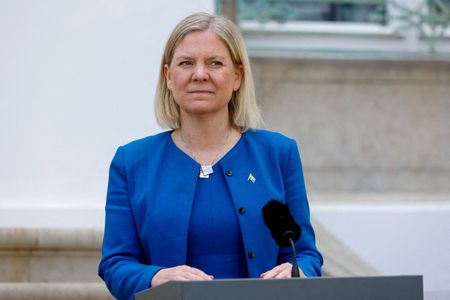 STOCKHOLM (Reuters) – Sweden’s ruling Social Democrats have called a parliamentary debate over NATO for Monday as the country readies for what is expected to be a decision to join the alliance in the wake of Russia’s invasion of Ukraine, abandoning decades of military non-alignment.

Sweden and neighboring Finland are both expected to opt to apply for NATO membership in the coming days after the invasion triggered a radical rethink of policy.

Firmly opposed to joining NATO for decades before the war – which Moscow calls a “special military operation” – the Social Democrats are due to announce their decision on Sunday.

Their support is seen as crucial for a NATO bid even if a parliamentary majority already exists in favour.

“There is great value in the government and the parliamentary parties discussing the major security policy changes that the Russian aggression brings with it,” the government said on Wednesday in its filing for the debate.

Should the Social Democrats back joining, as is widely expected, the minority centre-left government could call a parliamentary vote about sending through an application, but it is not formally required to do so.

If Sweden applies and is ratified by NATO’s 30 member states, the Swedish Riksdag would need to approve it in a vote, though this would likely be a formality given the expected broad support for membership in parliament.

For Sweden, at peace for more than 200 years, neutrality and military non-alignment has been a central pillar of policy that lasted throughout the World Wars and the subsequent Cold War, though its ties with NATO have steadily deepened.

In addition, its 1995 membership in the European Union has gradually deepened links and obligations with other countries in the bloc, most of whom are already members of NATO.

Yet Russia’s invasion of the similarly non-aligned Ukraine has brought a sea change in public opinion and a large majority of Swedes are now in favour joining NATO together with Finland, which is likely announce its intentions later this week.