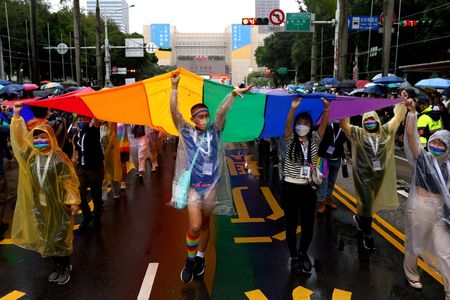 By Yimou Lee and Fabian Hamacher

Taiwan legalised same-sex marriage in 2019 in a first for Asia, and is proud of its reputation as a bastion of LGBTQ+ rights and liberalism.

The rainy streets of central Taipei were packed for the annual parade, the 20th since it began and including go-go dancers and drag queens on the back of colourfully decorated trucks, joined by several senior members of the ruling Democratic Progressive Party (DPP).

“I’m very proud that Taiwan has Pride,” said social worker Chang Chi, 28, who took part with her girlfriend. “Taiwan is the first place where same sex marriage was legalised in Asia. That’s not possible in many countries. Taiwan is a place where you can be who you are.”

Organisers put the number of attendees at 120,000, some of whom also carried flags and banners in support of Tibet, Hong Kong and Ukraine.

President Tsai Ing-wen, in a Facebook message of support for the Pride march, said people could scarcely have imagined 20 years ago that Taiwan would have lead the way in legalising same-sex marriage in Asia.

“Now, being able to choose marriage is something that most people find commonplace,” she wrote.

The event took place one month before Taiwan’s mayoral elections, a key test of support for the DPP and main opposition Kuomintang (KMT) ahead of presidential and parliamentary polls in early 2024.

Former Vice President Chen Chien-jen headed up the DPP’s delegation along with the party’s Taipei mayoral candidate Chen Shih-chung, who oversaw Taiwan’s fight against COVID-19 when he was health minister, marching behind a banner reading “democracy supports gays”.

Taiwan’s openness on LGBTQ+ issues stands in marked contrast with its giant neighbour China, which has been ramping up military pressure to assert its sovereignty claims over the island.

While same sex relations are not illegal in China, same sex marriage is, and the government has been cracking down on depictions of LGBTQ+ people in the media and on the community’s use of social media.