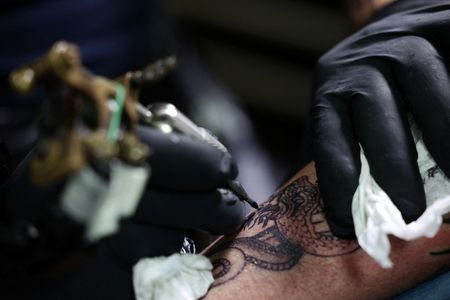 BRUSSELS (Reuters) – Tattoo parlours across the European Union were in crisis on Tuesday as a new rule came into force which effectively bans many of their most popular inks and which one artist described as like taking “taking the flour from a bakery.”

Tattoo artists say alternatives to the inks, some of which have been in circulation for decades, do not yet exist or are in short supply, and the law deals a blow to an industry already reeling after repeated lockdowns.

The law limits the use of certain chemicals which the EU said are hazardous, with some linked to cancer, reproductive difficulties and skin irritation, and which are contained in mixtures for tattoo inks and permanent make-up.

The law was agreed in December 2020 but the industry was given a year to adjust and find alternatives.

Star tattoo artist Tin-Tin, who heads the French tattoo industry union SNAT, told Reuters the new rules would just drive people to parlours that do not respect the legislation.

“It’s ridiculous. It’s like taking the flour from a bakery, it’s a stupid as that. If we don’t have any colours or ink to work with, what are we going to work with?” he said.

The European Commission said manufacturers and artists had had a year to prepare and alternatives exist, except for two particular pigments, for which more time was granted to find replacements.

The European Chemicals Agency, which is behind the research on the inks, said at least 12% of the EU’s 450 million citizens, so at least 54 million people, have tattoos.

The EU intends to harmonise laws across the bloc by setting maximum concentration limits for groups of substances or individual substances found in the inks.

Gwenaelle Reaume, the secretary of the Tattoo Belgium association, said the COVID-19 pandemic had held up research and production, calling on the government for more time.

While her salon had ordered inks from new, approved suppliers in time, many of her colleagues’ needles had run dry, she said. Still, her client Anne Keyen said she was not unduly worried about her existing tattoos.

“They put all sorts of things which aren’t good for health in food, and then they come after tattoo ink. I admit that, as someone with tattoos, I don’t understand this law,” she said.

(Reporting by Johnny Cotton and Jan Strupczewski, and by Lea Guedj in Paris; Editing by Alexandra Hudson)